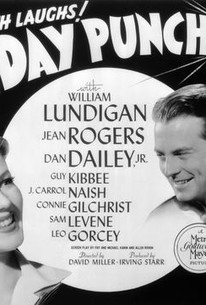 Another graduate of MGM's short-subject department, director David Miller proved he had what it took to helm a feature film for the studio in Sunday Punch. The harmless but diverting story concerns the rivalry, in and out of the ring, between prizefighters Ken Burke (William Lundigan) and Olaf Jensen (Dan Dailey Jr.). Both boxers are sweet on showgirl Judy Galestrum (Jean Rogers), and in fact it was for the love of Judy that shy, oafish Olaf quite his janitorial job to become a pugilist. When Olaf realizes that it's Ken whom Judy truly loves, he does the "right thing" by sending Ken off to dreamland during an important match, thereby encouraging the latter to give up boxing and return to his medical studies. The best aspect of Sunday Punch is the performance of Dan Dailey Jr., whose portrayal of a simpleminded Swede is convincing without ever lapsing into stereotype or condescention. ~ Hal Erickson, Rovi

Ava Gardner
as Ringsider
View All

There are no critic reviews yet for Sunday Punch. Keep checking Rotten Tomatoes for updates!

There are no featured reviews for Sunday Punch at this time.