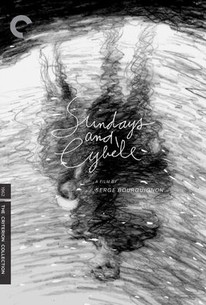 Sundays and Cybele (original French title: Les Dimanches de Ville D'Avray) stars Hardy Kruger as a former bomber pilot. Emotionally shattered by a tragic wartime incident, Kruger goes into semi-seclusion in a small Parisian suburb. He is drawn out of his shell by 12-year-old orphan girl Patricia Gozzi. The nuns in charge of Patricia bless the relationship, assuming that Kruger is the girl's father. A warm, chaste friendship develops between the older man and the bright-eyed girl, culminating in their mutual decision to spend Christmas together in a nearby woods. Unfortunately, nurse Nicole Courcel, suspecting that Kruger is a pedophile, calls the police--a move that can only result in disaster for all concerned. Based on a novel by Bernard Eschasseriaux, the exquisitely photographed Sundays and Cybele won the 1962 Best Foreign Film Academy Award. ~ Hal Erickson, Rovi

The viewer is a bit overwhelmed by the stark and diffused black and white photography, the eloquent simplicity of the subtitled dialog, and the always-present symbolism

Expect more resistance than usual to the implication that it's a classic ripe for the canon. Changing times do evolve past some things.

Director Bourguignon does not seem to understand that what is infantile is not necessarily childlike and certainly not charming.

This makes a slow but pictorially impressive film due to new director Serge Bourguignon's feeling for imagery and style. But it also leads to some preciosity.

How can one give a fair impression of the exquisite, delicate charm of this wondrous story of a magical attachment between a crash-injured young man who is suffering from amnesia and a lonely little 12-year-old girl?

This is an almost perfect union of the story-telling and photographic arts.

Hardy Kruger as the anguished ex-airman is seldom more expressive than a robot, and the story's implied protest against mob-minded callousness is both banal and fuzzy.

It is really the latest hat from Paris and, like its predecessors... is memorable only because it is trimmed with the most tasteful photographic effects. Like them, however, it struck me as more decorative than substantial.

Serge Bourguignon won the Oscar for best foreign language film with this self-promoting, arty affair, which countered the stylistic departures of the nouvelle vague by returning to French cinema's much-derided poetic tradition.

Serge Bourguignon treats a sensitive subject with grace here to create a warm, often poignant film, although his presentation tends to call attention to the film's style at the expense of substance.

This charming French film about the friendhsip between a German soldier and a French girl was nominated for the 1962 Foreign Language Oscar.

a lovely and somewhat forgotten film that likely couldn't be made today, so far the world has turned. a very effective portrait of an impossible relationship with wonderful black and white cinematography. and it seems yet another great french film lost in the new wave, tho it has a few experimental touches. this can be seen on youtube in excellent quality

Whaaat?!?! I guess I don't get this French New Wave, semi-surealistic view of life. So this recovering bomber pilot, Pierre, has a case of amnesia. He has a job assisting a bird cage maker, and a nurse who took care of him when he returned from the war has tried to start a romantic relationship with him. He has a hard time enjoying life though because he is tormented by not being able to remember his past. Then this underage girl is brought to the Ville d'Avray to be left at a Catholic school in town. Pierre immediately becomes a little unhealthily obsessed with the girl and trying to make sure the father doesn't upset her. He picks up a bag the father forgot to leave for the girl and finds out that the father is not planning to come back to visit or anything. When he returns to the school to deliver the bag on Sunday, the nuns mistake him for the girl's father, and allow them to visit for the afternoon. Thus begins this strange relationship. He reverts to a childlike sense of play and imagination. He feels that she helps him, that he will be able to remember his past the more time they spend together. The girl reveals that her mother abandoned her to run away with another man, her grandmother who took over caring for her kept trying to push her off on other people, then finally her father abandoned her at this school and she knows he will never return. She says the nuns do not like her real name because it is not a Christian name and so call her Francoise. She plays a game with Pierre withholding what her real name is. She is very sensitive, needy, clingy, morbid, and prone to inventing fantasy like situations. These two hurting souls spend a lot of time in a local park enjoying the trees and the ripples in the lake. She has a crush and talks about marrying Pierre as soon as she turns eighteen. He shrugs this off and never really makes any inappropriate moves on her. But it is an uncomfortable, inappropriate relationship pretending to be father and daughter in public, but hiding the "dates" from certain people. People who know Pierre start to catch on and some think there is nothing to worry about, while others think something dangerous is going on. Perhaps it ends too tragically, but the suggested French sensibilities of the 60's that this relationship is healthy and appropriate is hard to believe. Technically, there are many interesting uses of the camera. There are several shots of reflections and ripples in the lake. There are a couple instances of shooting the reflection of a side view mirror as a vehicle drives down the street. Then there is a kaleidoscope view looking through a jewel and a distorted view looking through the bottom of a wine glass. The video copy I watched was pretty washed out in the whites and the English subtitles were in white, so at times it was impossible to read or understand what was being said. I think I understood the general idea even if I couldn't follow every line, but still I found myself checking the clock every few minutes. It didn't hold my attention.