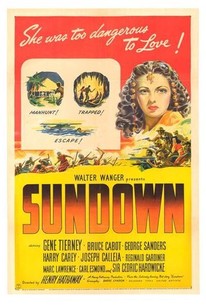 Adapted by Barre Lyndon from his own Saturday Evening Post short story, Sundown takes place in Africa during WW2. British army major Coombes (George Sanders) cannot abide the local Arab population, and he has even less time for district commissioner Crawford (Bruce Cabot), who has befriended the natives. Crawford is particularly fond of the beautiful Zia (Gene Tierney), whom Coombes suspects of being a Nazi sympathizer. But when the British troops must make their way through treacherous uncharted territory, they are forced to rely upon the guidance of the enigmatic Zia. Cedric Hardwycke spouts reams and reams of symbolic dialogue as the local British bishop, while among the native extras is a very young Dorothy Dandridge. Impressively photographed (by Charles Lang) and directed (by Henry Hathaway), Sundown just misses being as profound as it obviously wants to be.

Curtis Nero
as Corporal of Askaris

A beautiful movie that vividly narrates what arms trafficking can cause in the English colonies of Africa. [Full Review in Spanish]

Not bad desert pic set in a time of colonialism in Kenya. Gene Tierney is fantastically beautiful but still green in front of the camera and miscast but she tries. George Sanders gives the best performance and seems looser than usual.