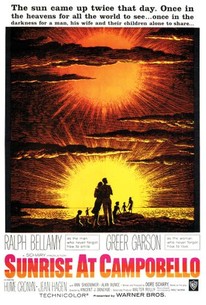 One of only two theatrical features by television director Vincent J. Donahue, Sunrise at Campobello is a biography of President Franklin D. Roosevelt that attempts to illustrate the statesman's courageous battle against infantile paralysis and his political foes. While in the prime of his life, Roosevelt (Ralph Bellamy) is stricken with a debilitating illness that threatens to end his career. Fortunately, his wife, Eleanor (Greer Garson), faithfully helps him regain his strength and become one of America's most influential and beloved Commanders in Chief. Hume Cronyn also stars as F.D.R.'s political strategist Louis Howe, who forms a successful triumvirate with the Roosevelts. For her performance, Greer Garson received a Best Actress nomination at the 1961 Academy Awards. ~ Matthew Tobey, Rovi

Critic Reviews for Sunrise at Campobello

This is an exceptional and inspiring true story.

In the journey from stage to screen this chapter from the life of Franklin Delano Roosevelt loses none of its poignant and inspirational qualities, none of its humor and pathos.

Franklin D. Roosevelt's valiant, cheerful battle against polio and despair at his summer home in New Brunswick in the early 1920s has been turned into a stirring and entertaining film.

Indeed the movie is, from any rational viewpoint, terrible... It's all prime quality ham, but it's interesting to watch.

Greer Garson received her seventh Best Actress Oscar nomination for playing Eleanor Roosevelt in this conventional biopic, based on the Broadway play.

A heartwarming look at the early years of Franklin D. Roosevelt.

Inspirational biopic on the only American president to be elected for four terms.

Audience Reviews for Sunrise at Campobello

Bill Murray's recent depiction of Roosevelt continues the middling attempts at capturing his life that was first tried in this film. Like Roosevelt himself, we are trapped in Campobello which seems like a good place to vacation but not to base a film around.

Good old fashioned biography of FDR's struggle against polio and his journey back to the political arena. Good supporting performances and a handsome production add luster to this but the real strength of it is in the performances of Greer Garson as Eleanor and especially Ralph Bellamy in the best role he ever had as FDR. Wonderful ending.