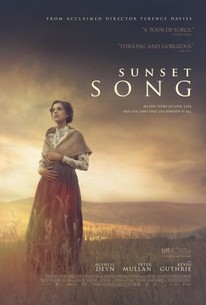 Sunset Song is Terence Davies' intimate epic of hope, tragedy and love at the dawning of the Great War. A young woman's endurance against the hardships of rural Scottish life, based on the novel by Lewis Grassic Gibbon, told with gritty poetic realism by Britain's greatest living auteur. The film takes place during the early years of the twentieth century, with the conflicts and choices a young woman experiences reflecting the struggle between tradition and change; a struggle that continues to resonate today. Set in a rural community, Sunset Song is driven by the young heroine Chris and her intense passion for life, for the unsettling Ewan and for the unforgiving land. The First World War reaches out from afar, bringing the modern world to bear on the community in the harshest possible way, yet in a final moment of grace, Chris endures, now a woman of remarkable strength who is able to draw from the ancient land in looking to the future. Sunset Song is at once epic in emotional scale and deeply romantic at its core, given power by Terence Davies' unflinching poetic realism

Jack Greenlees
as Will Guthrie

Gilbert Johnston
as James - the Chauffeur

James A. Adamson
as Piper

Based on the first book in Lewis Grassic Gibbon's A Scots Quair trilogy, British cinema luminary Terence Davies's Sunset Song takes the beloved Scottish classic and bestows it with his own distinctive creative signature.

It has taken Terence Davies 18 years to bring Sunset Song to the screen, but it was worth it.

Davies is in no hurry to tell this intimate story, and he handles it with his customary sensitivity, confirming his status as one of Britain's finest contemporary directors.

As a saga, the film waxes and wanes, but Davies' feel for the painterly landscape and the exquisite construction of whatever is within his frame never wavers.

It blooms with moments of astonishing beauty: a yellow frenzy of springtime trees; a still room where the light slants in the window like a reaching hand; a desolate landscape, impossibly green.

Sunset Song is a lamentation on time passing, the loss of a way of life, and a love song to its inhabitants' attachment to the land.

There's a lot to love in Sunset Song, but there could be even more with a more focused, less comprehensive narrative.

What remains - Davies' way with a score and the performance of Kevin Guthrie as Ewan Tavendale, Chris's beau, are the true highlights of the picture.

It's so long that by the end you're praying for the sun to set on this a good hour before it finally does.

It's visual beauty is offset by the fact that the main character remains a cypher from begging to end.

Want to visit Scotland but can't afford a plane ticket? Want to see it from a rural perspective, pre-WWl, but no one's invented a time machine yet? You could do worse than this brief visit with a family living their day-to-day lives. Not a lot of exposition here, but it's all beautifully filmed. It's dull in some places, no doubt like Scotland herself, and you'll long for a chase scene somewhere, anywhere, even if it's only in a supermarket.