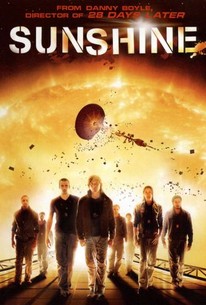 As the sun begins to dim along with humankind's hope for the future, it's up to a desperate crew of eight astronauts to reach the dying star and reignite the fire that will bring life back to planet Earth in this tense psychological sci-fi thriller that re-teams 28 Days Later director Danny Boyle with writer Alex Garland and producer Andrew Macdonald. The skies are darkening, and the outlook for planet Earth is grim. Though the encroaching darkness at first seems unstoppable, scientists have concocted one desperate last-ditch plan to buy the human race a temporary reprieve from the grim future that looms just past the horizon. A crew of eight men and women has been given a nuclear device designed to literally reignite the sun and sent hurtling through infinity on the most crucial space mission ever attempted. Suddenly, as the crew loses radio contact with mission control, everything begins to fall apart. Now, in the farthest reaches of the galaxy, the men and women who may hold the key to ultimate survival find themselves not only struggling for their lives, but their sanity as well. Rose Byrne, Chris Evans, Cillian Murphy, and Michelle Yeoh star in a film that asks audiences just what would become of humankind if the sky suddenly went black.

Sylvie MacDonald
as Child
View All

The human interaction and tension works, how every single member can be sacrificed for the larger good of the humankind. But the acting is uniformly dull, the cast is deadpan, poker-faced and robotic at best.

Nothing anyone does makes much sense, but gad, is it ever gorgeous.

The picture would be nothing, an incomplete Venn diagram, without Murphy.

On sci-fi's crowded table Boyle serves a fresh feast for our eyes, minds and hearts.

Sunshine, if a fireball, is one that warns us yet again of the danger of flying too close to the sun.

Seems to linger in the realm of horror at the most inappropriate times, while also stifling the sense of adventure at equally inopportune moments.

Sunshine works on every level it strives for. If you come into the film looking for a thrill ride, the chances are good that you will be watching tensely with nothing less than the fate of the world hanging in the balance.

[Sunshine] delivers the visually incarnate truth of the universe's mysticism.

In an age of technical advancements when filmmakers have circumvented ideas for synthetic visual thrills, here is a movie that plays like some decisive, brilliant rebellion to that pattern.

Don't pack a tube of SPF 50 to the theater; bring a can of Jolt or a double espresso.

Boyle's entry to the space opera category begins well; crew introduction, personality dynamics, and plot direction, only the finale gets murky as the mission to save the Earth gets closer to resolution, as the ship gets closer to the sun.Still a worthy effort.

A remarkable, completely mesmerizing under-seen film from Danny Boyle about a group of eight astronauts sent up into space in hopes of reviving a dying sun 50 years into the future by setting off a nuclear bomb the size of Manhattan Island inside it. Everybody complains about the last 1/3 of this film, and I'm not quite sure why. Yes, it undergoes a dramatic shift in tone but I for one found it to add yet another thrilling layer to an already intense story. Cillian Murphy's all-out turn drives this film for the most part, with nice support from his supporting cast. More importantly, this thing is just beautiful to look at. The one thing I would complain about would be a lack of character development (then again, you could say the same thing for "Alien" and other classics, too, which I love) and an unclear look at why the main villain in the film chooses to do what he does. Still, as violent as the tone change might be and as underdeveloped or undercooked some of Boyle's and writer Alex Garland's ideas might look at times, this picture makes up for these shortcomings and some by providing a ridiculously hypnotizing story and action on-screen. The ending is both tragic and fitting, with an epic score to complement the orange waves of the beautiful sun captured in full-scope. I for one really, really like this movie.

A new sci fi movie that i hadnt heard about but was better than i expected.