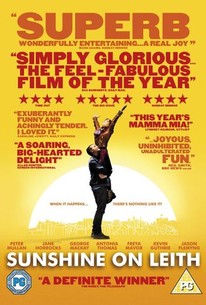 Critics Consensus: Sunshine on Leith is a musical so charmingly good-natured that even viewers who don't like musicals may find it difficult to resist.

Critics Consensus: Sunshine on Leith is a musical so charmingly good-natured that even viewers who don't like musicals may find it difficult to resist.

Critic Consensus: Sunshine on Leith is a musical so charmingly good-natured that even viewers who don't like musicals may find it difficult to resist.

This film is a jubilant, heartfelt musical about the power of home, the hearth, family and love. It is the tale of one tight-knit family, and the three couples bound to it, as they experience the joys and heartache that punctuate all relationships. And they do it all while singing to the euphoric music of The Proclaimers.

Paul Brannigan
as Ronnie
View All

Critic Reviews for Sunshine on Leith

There are sentimental elements, and not all the songs are top-drawer, but despite that the unlikely idea of having characters burst into song as they walk down the street or drink in a pub worked for me.

The flash mob finale, with what looks like 500 dancing Edinburghers, is about the most fun I've had in a cinema this year.

I shed a tear within the first 10 minutes, and spent the rest of the movie beaming like a gibbering, love-struck fool.

Fletcher's faux-rootsy, unoriginal crowd-pleaser keeps insisting that we see it as a ray of sunshine. It didn't work for me, but Mullan provides one hell of a silver lining.

We'd say it was a Celtic Umbrellas of Cherbourg. But they didn't have headbutts or anything like as much fun in that film.

A convivial and well-shot musical that forms a narrative and articulates the variable emotions of its characters through upbeat, crowd-pleasing pop songs to varying degrees of success.

By the time you get to the saccharine finale, it's turned into The X Factor, but with kilts.

This is bright, breezy and charming entertainment at its best, even if you're not a mad fan of the musical genre.

It's pleasant. It will provoke a smile. Take your grandma

Lovers of musicals and/or The Proclaimers may find themselves overlooking the flaws and enjoying this film a lot more than me.

Fans of The Proclaimers will obviously eat this up while non-fans will appreciate the dramatic salt sprinkled over the musical sweetness that keeps this from becoming twee.

Audience Reviews for Sunshine on Leith

After recently enjoying the debauched underbelly of Edinburgh in Irvine Welsh's "Filth", I was curious to see Scotland's capital feature again in a more lighthearted film. As a general rule, I avoid musicals at all costs as I'm just not that keen on people bursting into song every few minutes. However, I was impressed by actor Dexter Fletcher's impressive directorial debut "Wild Bill" in 2011 and couldn't resist the urge to see a musical featuring the fantastic songs of The Proclaimers. After a tour of Afghanistan, two young recruits, Davy (George MacKay) and Ally (Kevin Guthrie) return home to Leith, Edinburgh to adapt to civilian life. They both find love in their lives but realise that relationships are never easy, regardless of age. Davy hooks up with nurse Yvonne (Antonia Thomas) while Ally plans to marry Davyâ??s sister, Liz (Freya Mavor) who wants to move to America. Meanwhile Davyâ??s mum and dad Rab (Peter Mullan) Jean (Jane Horrocks) have problems of their own. There will more than likely be a few readers who are unfamiliar with the music of Scottish double-act, The Proclaimers but don't let that deter you from this film. The songs of Charlie and Craig Reid are perfectly fitting to this working class drama and Fletcher does a fantastic job of intertwining the struggles of his characters with the band's clever and poetic lyrics. As expected, people do burst into song every now and again but the delivery is so charming and delightful that it's very difficult not to get swept up in the enthusiasm of everyone involved. Such classics like "I'm on my way", "Letter from America" "I'm gonna be (500 miles", "Should have been loved" and, of course, the beautiful "Sunshine on Leith" are pitched perfectly for individual scenes either with the requisite verve or pathos that's demanded. Quite simply, the film is an absolute joy and credit has to go to Fletcher for another interesting and accomplished directorial outing. Admittedly, the film has it's moments of over sentimentality but the performances are committed enough to make it work overall; Peter Mullan's gravelly tones may not be to everyone's satisfaction but otherwise he's reliably solid while the likes of Jason Flemyng and youngsters George MacKay, Kevin Guthrie, Freya Mavor and Antonia Thomas all equip themselves well. For those that have seen "Little Voice", however, will not be surprised to hear that it's Jane Horrocks who's most comfortable with her numbers. Not only is she a highly underrated actress but also one with wonderful vocal talents. What with likes of Danny Boyle's "Trainspotting" and "Shallow Grave", Ken Loach's "My Name Is Joe" or even the aforementioned "Filth", it's refreshing to see a film set in Scotland that steps away from the grim social realism and paint the city inhabitants in a playful and joyful manner. Cheerful, easy-going and so warm that only the hardest and coldest of hearts will be able to resist it's charm. What "Mamma Mia" did for fans of Swedish band Abba, this little gem will, no doubt, do for those that enjoy The Proclaimers. Mark Walker