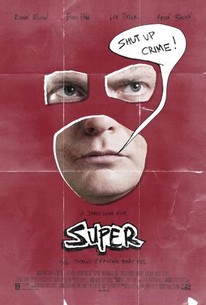 In the outlandish dark comedy SUPER, James Gunn has created what is perhaps the definitive take on self-reflexive superheroes. When sad-sack loser Frank (Rainn Wilson) sees his ex-addict wife (Liv Tyler) willingly snatched by a seductive drug dealer (Kevin Bacon), he finds himself bereft and wholly unable to cope. But soon he decides to fight back under the guise of a DIY superhero called Crimson Bolt. With a hand-made suit, a wrench, and a crazed sidekick named Boltie (Ellen Page), the Crimson Bolt beats his way through the mean streets of crime in hopes of saving his wife. The rules were written a long time ago: You are not supposed to molest children, cut lines or key cars; if you do, prepare to face the wrath of the Crimson Bolt! No stranger to rebel filmmaking, James Gunn cut his teeth writing for Troma before making his directing debut with 2006's SLITHER. In a similar vein, his follow-up feature combines absurd humor with balls-out violence to create something that is both unashamed and inimitable. But this time Gunn adds a new ingredient, one that is dark, dramatic and subversive to the core. -- (c) IFC Films

Nathan Fillion
as The Holy Avenger

Matt Moore
as Jesus/Guy in Line

Gerry May
as Newscaster

Mark de Alessandro
as Thug Jumped on by Boltie

How Two of James Gunn’s Early Cult Gems Prepared Him to Blow Up the Superhero Genre
Critics Consensus: Source Code Is Certified Fresh

Gunn's movie is an ingeniously nasty concoction that feeds the cult of superhero fandom back into itself.

Thanks to Wilson's ridiculously nerdish ambition, and a lively performance from Page, there are laughs to be had, but it could have been a funnier parody.

Writer-director James Gunn eventually loses control of the tone, which slips from deadpan to deadly and trashes what little amusement there was in a finale of gruesome violence.

As black comedy, it works reasonably well some of the time, with plenty of black but not much comedy.

Offers genuine empathy with the put-upon protagonist's longing for justice, yet plays the bloody ramifications for cartoonish fun.

A brilliant twist on the everyman crime-fighter genre, as violent and human as it is funny.

Liv Tyler serves up her best performance in years.

This critic recommends this idiosyncratic film -- as long as you aren't too bothered by the sight of men getting the life beaten out of them.

Super has confirmed that [Ellen Page] is indeed one of most talented young actors around.

It's difficult to tell if director James Gunn really is trying to play for laughs, because so much of the one-liner humor is inconsistent.

If I hadn't foolishly gone and saw Sucker Punch a couple weeks ago, this would be the worst film of the year.

Working pretty well as a sympathetic character study centered on a righteous man who believes he is on a divine mission from God, this inspired movie is like a sassy brother of Kick-Ass: oddly funny, amusing and making no concessions regarding its amount of violence.

The best of the "why-doesn't-someone-suit-up-and-go-fight-crime-like-Batman" genre of film, capably sold by the sure hands of the director James Gunn and the solid casting of Rainn Wilson and Ellen Page. As with Guardians, Gunn's soundtrack is kick ass (sorry, I couldn't help myself) as well.

Director James Gunn has a knack for making genre films that go outside of regular film conventions. With "Slither" he made an old time monster movie that coupled with horror and thrillers. Here he takes on the superhero milieu, and in the same way as "Kickass," easily subverts the traditional hero. While that film was more about teenaged angst and hardcore violence, "Super's protagonist is much darker, very prone to violence, and he definitely does not have his life in order. Frank (Wilson) is a very confused man who has his wife taken away from him by violent individuals who have drugged and re-addicted her to drugs. He has acted as her rock for so long that when she is powerless to even save herself, he jumps into action and takes on the unique catchphrase of "Shut up crime!" Frank has his own virtues and creed, but he oftentimes takes justice too far but without repercussion. Instead of finding the character repulsive and his actions incomprehensible, the film celebrates the blood and sometimes gore. Frank fights tooth and nail to save his wife, and his sacrifices, whether physical, mental, or emotional, are all brave and heartbreaking to watch. The film gets much darker when he takes on sidekick Boltie (Page), who has a violent streak that runs deeper than anything Frank could imagine. Her rage and lack of common sense seems to work well with his naiveté and need to crusade for justice. The film is also laced with black comedy, and it works well with what the film is. The relationship between Frank and Boltie is both obviously flawed and always entertaining. The action has some bloody battles, but what makes these scenes really interesting is how excited Frank is to burst into battle, and yet it's so painful and frightening for him. It's not just a film about bloodletting of course; it's also about a man who takes on everyone, to save the one person he has always protected.