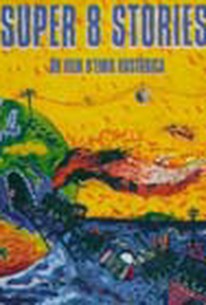 When Yugoslavian-born filmmaker Emir Kusturica isn't busy directing films like Crna Macka, Beli Macor and Dom Za Vesanje, he plays guitar with the No Smoking Orchestra (aka Zabranjeno Pusenje), a ten-piece ensemble that blends the folk music styles of the Balkans with the anarchic energy of rock & roll; the group has won a large and devoted audience in Europe for their witty, raucous music, which often features lyrics that are pointedly critical of the political situation in their native Sarajevo. Super 8 Stories, which was shot using both Super-8 film and portable Digital Video cameras, offers a look at the band's fascinating 20-year history of battling political censorship and struggling to survive the violent upheavals in the Balkans, as they tour Europe in the wake of their acclaimed 2000 album Unza Unza Time. Joe Strummer, former leader of the Clash and a fan of the No Smoking Orchestra, briefly sits in with the band for one number. ~ Mark Deming, Rovi

There are no critic reviews yet for Super 8 Stories. Keep checking Rotten Tomatoes for updates!

There are no featured reviews for Super 8 Stories at this time.