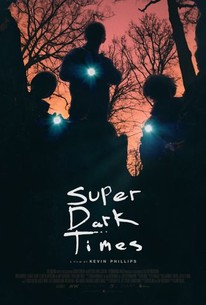 Critics Consensus: Rich in atmosphere and period detail, Super Dark Times is an effective teen thriller whose true power lies in its approach to deeper themes.

Critics Consensus: Rich in atmosphere and period detail, Super Dark Times is an effective teen thriller whose true power lies in its approach to deeper themes.

Critic Consensus: Rich in atmosphere and period detail, Super Dark Times is an effective teen thriller whose true power lies in its approach to deeper themes.

A harrowing but meticulously observed look at teenage lives in the era prior to the Columbine High School massacre, SUPER DARK TIMES marks the feature debut of gifted director Kevin Phillips, whose critically acclaimed 2015 short film "Too Cool For School" premiered at the Cannes Film Festival. Zach (Owen Phillips) and Josh (Charlie Tahan) are best friends growing up in a leafy Upstate New York suburb in the 1990s, where teenage life revolves around hanging out, looking for kicks, navigating first love and vying for popularity. When a traumatic incident drives a wedge between the previously inseparable pair, their youthful innocence abruptly vanishes. Each young man processes the tragedy in his own way, until circumstances grow increasingly complex and spiral into violence. Phillips dives headlong into the confusion of teenage life, creating evocative atmosphere out of the murky boundaries between adolescence and adulthood, courage and fear, and good and evil.

[Super Dark Times] is an impressive piece of work that deserves to be seen. And if it takes the hype around something more mainstream to draw attention to its existence, well, stranger things have happened.

I wasn't as impressed with the film as some of my fellow audience members, but Kevin Phillips, transitioning from music videos to feature films and from cinematography to directing, has an undeniable eye.

An effective thriller, anchored by great performances and a strong visual language for a debut film.

Both a thriller and meditation on the loss of innocence, Super Dark Times is rich with the minutiae of a bygone era ... but Phillips and screenwriters Ben Collins and Luke Piotrowski press hard against the instinct for nostalgia.

[Kevin] Phillips kind of stumbles when he tries for a pat wrap-up of a still-horrific problem. But when he digs into the muck of the rot at the heart of it, he comes up with some unforgettable moments.

... there is a refreshing candor to this film that's wonderful.

The realism in this film is more than any other film that's been on this list. It's true and it's sad and it's... heartbreaking but it doesn't make much sense unfortunately.

Super Dark Times goes from being a thriller to being a meditation on adolescent violence and toxic behaviors. [Full Review in Spanish]

It is a film in which every aspect has been given noteworthy attention, and the end-result just clicks and feels right.

The ending feels a tad hamfisted in its execution, but by and large is a fantastic debut film for Kevin Phillips, and I'm excited to see how he follows it up.

Modern thriller that gives us hope. This is a dark depiction of teenage angst that works perfectly. [Full review in Spanish].

Phillips has nailed what is a simple storyline, the atmosphere is unbearable at times and the escalation makes this one of the best films of 2017. This looked to be a simple teen thriller but the critical acclaim surrounding this film is what grabbed my attention and I wasn't disappointed. Phillips is going to develop into a filmmaker to watch and if you are looking for a film that spirals into something unpredictable, ensure you check this film out. Great acting and just a film that needs to be discovered. 24/02/2018.

Any time a movie looks like it's trying to hit the "Fucked Up Coming of Age Movie" notes, I'm interested. Super Dark Times is perhaps not the grandest example of them all, but it's still a very good one.

One of the little inspected factors of growing up is the curious rivalry between friends, and this story takes a look at that under the microscope of the most extreme of situations: the vying for the affections of a woman. The director keeps things interesting and fresh, aided by decent performances, as a sword (yes, sword like in Conan or Tolkien) becomes the deciding bone of contention, well, that and the accidental murder of a friend. Worthy.