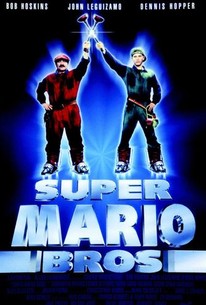 Critics Consensus: Despite flashy sets and special effects, Super Mario Bros. is too light on story and substance to be anything more than a novelty.

Critics Consensus: Despite flashy sets and special effects, Super Mario Bros. is too light on story and substance to be anything more than a novelty.

Critic Consensus: Despite flashy sets and special effects, Super Mario Bros. is too light on story and substance to be anything more than a novelty.

The huge success of the video games featuring animated Italian plumbers the Mario Brothers led to this $42 million live action movie. The two brothers (Bob Hoskins and John Leguizamo) live in Manhattan and are chasing Princess Daisy (Samantha Mathis), who wears a necklace made from a meteor fragment. Its powers can free a race of reptilian creatures from the city's sewers. The villainous ruler of the creatures, who are descendants of dinosaurs, is King Koopa (Dennis Hopper). Koopa has kidnapped Daisy and taken her to the underworld of Dinohattan, which is rat-infested and strewn with garbage. The Mario Brothers must overcome many obstacles, just as they do in video games, to free the princess. The film spares no expense with its use of animatronic monsters and high-tech special effects. ~ Michael Betzold, Rovi

Lance Henriksen
as The King

I prefer a film that takes risks over inane projects. [Full review in Spanish]

Like their video-game counterparts, co-stars Bob Hoskins and John Leguizamo somehow manage to weave their way past threatening obstacles and escape with their dignity.

Scenery rushes by, noise blares, characters pop up wearing new costumes that they couldn't possibly have had time to change into as they eluded their adversaries.

Ultimately, it's one more stop in the arcade, beckoning, waiting to soak up time and money.

Unfortunately, the highlights are sporadic.

...Super Mario Brothers is an origin story, but adds so much detail that any joy of seeing Mario fly is negated by heavy plotting and far too much time spent watching Hopper/Koopa chew the scenery...

Although the theatrical release is perhaps too narratively disjointed and tonally dissonant to qualify as 'good,' it so proudly brandishes its bonkers, go-for-broke aesthetic, one hesitates to label it entirely 'bad' either.

Hoskins and Leguizamo... are able to sell themselves as the plumbers in large part because of the obvious fact that they both understood the movie was only taking itself but so seriously.

I don't honestly believe it deserves its reputation as one of the "worst films ever made", but I still wouldn't bother with this one...

Its eccentricities make it tremendously entertaining. [Full Review in Spanish]

Super Mario Bros is not a good movie, but it is psychotronic cinema of the first order.

So bad I have not enough words to describe it. I can nitpick as a fan of the video game how this live action version fails and I can tear it apart as a film fan, but why bother. You can either avoid this film like a plague of fungus, or you can watch it over a few beers and laugh your ass off at its awfulness.

So could this be one of the worst films ever made?? yep we have a contender. Huge on hype and anticipation but hugely sole destroying upon release. Its hard to comprehend what the creators of this film were looking to achieve, the style, looks, soundtrack, plot, basically any links to the classic legendary videogame are none existent. The main issue with this film is the blatant fact it has NOTHING to do with the classic videogame. Apart from the two leads and the villain there is zero here to please anyone unless you have a metal and dinosaur fetish. True Hoskins does look wonderfully like 'Mario' in his red n blue jumpsuit and I did quite like the sliminess of Hopper as 'Koopa' but that's as far as it goes. The whole thing is just so damn odd, its a corny thing to say but its basically 'Mad Max' 'Highlander II' and 'Blade Runner' styled futuristic visuals aimed at children but utter nonsense. I guess this could be forgiven if the visuals were good or original but its all so ugly and scrappy looking. As if no one could really be too bothered so they just tossed a load of sparking metal, badly dressed extras and the most bizarre designed cars I've ever seen...everywhere. Nothing really makes much sense in any way whatsoever, sure its a kids film and 'Mario Bros' isn't a stern reality based concept but some of the decisions in this film!. The effects of course are horribly dated now which you can't poke fun at really but geez its nasty!. Early CGI effects, terrible stunts with obvious wire work, awful costumes, the fungus king and awful hairstyles...yet the dino model/puppet of 'Yoshi' looks good and moves quite nicely. It really does feel as if the bigwigs had gotten halfway through making one film and suddenly decided to turn it into a Mario film for kids. Just take the tonne of crappy looking junk they already had going and stick in some very loose references to Nintendo's big franchise and voila! instant Mario Bros movie hurrah!. I really believe this was the set of 'Lawnmower Man 2' transformed at the eleventh hour, and they still fudged that up too. Its not too often that a film is really so bad, really its not!! and this was suppose to be a blockbuster and franchise builder!. Sure there are bad films but this is really really quite terrible in all areas with virtually nothing to save its ass. I did quite like the use of the old Nintendo Super Scope 6. But was that a clever little easter egg wink/nod for the legion of NES/SNES players or did they really think they could fool everyone into thinking it was a proper purpose build prop?. I'll let you decide.

Oh god this film... This film was every one of these actor's low points in their carrer's. From the second I was told there was a Super Mario Brothers movie, I knew it was going to be bad, but I wasent expecting it to be this bad. I should start off by saying the film was narrarated by Homer Simpson. I then new this would be the cheesiest thing EVER. Then it wasent til later in the film I was like, 'Wait, is that... no, that cant be Dennis Hopper!' but saddly it's true. Bob Hoskins as Mario, Hopper as King Koopa and MOJO NIXON AS TOAD!!! COME ON! What's sad is you know they wanted to make a sequal to this and thank the beard of Zeus they didnt! They didnt include Peach, Wario, Donkey Kong or even the main bad guy BOWSER! Please avoid this film at all cost, for your own sake... I can never get those 114 minutes of my life back...

One of the first awful video game to screen adaptation. This adaptation of the popular video game franchise, Super Mario Bros. To say that this film is trash is an understatement. This film is poorly constructed; everything about it seems out of place, poorly conceived, sloppy and lazy. I really don't know if Super Mario brothers could have been a good idea for a good film. But by having seen this film, evidently not. I saw it when it came out, and hated it back then, hate it now. This film is a poor waste of celluloid and money. If this film would have been made today, it probably would have been directed by Uwe Boll, famed awful director of awful video game to screen adaptations. This films awful plot is decorated with lavish special effects, and unfortunately, it doesn't redeem this horrid film. The cast are terrible in their parts and it sinks the film even further. Sure, the idea of making a film based on the Mario Bros could have been cool, but this film is simply poorly executed. If you haven't seen this film, and are considering it, don't. This film is a waste of time. Stick with playing the classic video game, as it's far superior to this trash. Super Mario Bros was simply filmed to make a quick buck, and this film stands as a testament as no matter what kind of crap the studios greenlight, no matter how awful it is, the audience will go see. Luckily, this film sucks big time, and is a total waste. Avoid this if you haven't seen it. You'll be glad you did.