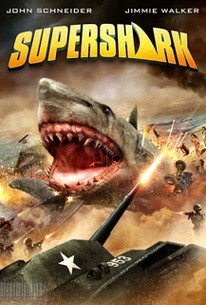 A massive, primordial shark goes on a bloody killing spree after being set free during an offshore drilling mishap in this saltwater shocker starring John Schneider and Jimmie "JJ" Walker. As the tide runs red with blood, marine biologist Kat Carmichael (Sarah Lieving) finds her efforts to destroy the giant killing machine repeatedly foiled by shameless corporate shill Roger Wade (Schneider) and his scheming sidekick Stewart (Jerry Lacy). But when the beast begins using its flippers to walk on land, Kat recruits fearless Skipper Chuck (Tim Abell) and wisecracking DJ Dynomite Stevens (Walker) to blast it back into the ocean.

There are no critic reviews yet for Super Shark. Keep checking Rotten Tomatoes for updates!

See that tank on the front cover? It's a walking tank. That's not a spoiler you literally see that in the opening scene (a flash forward), so why would they not make use of that fact as promotional material? I guess, because, like the entire movie itself, its super dumb.

One does not go into a B-movie expecting to see anything in the line of quality work. One goes into a B-movie expecting comedic values from poor execution, this mostly disappoints and not in a "so bad it's good" way. Super Shark is about a giant prehistoric shark causing havoc on a nameless town. I'm not kidding when I say that more than half of this film is filler. It started when we're first introduced to our three main characters who are lifeguard and two of the female lifeguards like the same guy. If you're wondering what this to do with the plot i'll tell you. ABSOLUTELY GOT-DAM NOTHING. All those three characters die in the movie and added nothing to it. Though one scene involving the two female lifeguards was funny when one of them shouted "I wish I would die" and then the shark comes out of nowhere and eats both of them. The other plot-line is about a scientist trying to kill the prehistoric sharks. I found it hilarious how she convince and oil tycoon that there's chemical in the water by taking a lemon and squishing lemon juice into it in front of him. The ironic part is that he bought it and it leads to even more filler. It has a bikini contest which serves no purpose with the most obnoxious host who unfortunately doesn't get eaten. Moments like these serve nothing to move the plot forward, than the filmmakers had the nerve to insert a photo shoot scene of the winners. In that photo shoot scene, a woman defends herself momentarily with a beach umbrella and Super Shark has trouble killing her, though he didn't have problems sinking an entire oil tanker and an taking down an airplane. Which leaves nothing but the climax to talk about, trust me the non shark scenes are nothing worth writing about. The climax involves Super Shark going up against a walking tank, I was actually looking forward this. It's not often you a walking tank fighting against a giant shark, but it disappoints. After a hilariously bad animated battle accompany by cheesy CGI, our Super Shark defeats the walking tank by simply tipping it over by hitting gently with his nose. Now that part of the climax did make me laugh and the scenes involving the shark are entertaining and should make you laugh at least once. Skip the boring humans section, they're terrible actors and aren't interesting. Super Shark has some funny moments, but the humans take up around 80% of screen time and it's not worth it. Just skip to the shark scenes for some laughs if you want, but for everybody look elsewhere for your entertainment.