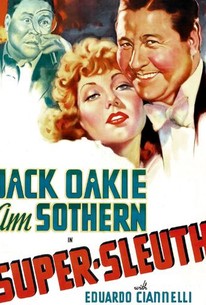 Super Sleuth stars Jack Oakie as an egotistical movie actor who specializes in detective roles. Despite the gentle remonstrations of his girl friend (Ann Sothern), Oakie fancies himself a genuine master sleuth, and in this capacity offers his services to the law in helping to solve a recent series of "poison pen" murders. In truth, Oakie is so dense that he can't figure out that the seemingly benign criminologist (Eduardo Cianelli), who supplies him technical information on his film roles, is the actual murderer. Edgar Kennedy, the real detective on the case, solves the mystery himself, but not before Oakie is nearly bumped off in the criminologist's "chamber of horrors." Super Sleuth was ineptly remade in 1946 as Genius at Work, a vehicle for RKO's prefabricated comedy team of Wally Brown and Alan Carney.

Crime comedy with funny first half and early noir atmosphere is done in by stereotypes.

Mild programmer is helped by the charm of leads Oakie and Sothern.