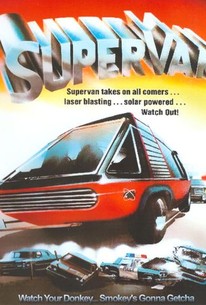 Disco Fever director Lamar Card returns to deliver another flick that could have only been made in the 1970s. All Clint needs to be happy is a wide open road and a full tank of gas for Vandora, his futuristic custom van. Clint is on his way to enter Vandora into the "Freakout" van competition when the cherries of a police cruiser start glaring in his rearview mirror. But the cops aren't the only ones keeping Clint and Vandora from getting to the "Freakout" in time for the competition; a gang of hot-headed bikers are determined to drive him straight off the road. With time running out and the competition fast approaching, Clint punches the gas and uses his solar-powered lasers to blow away anyone who gets in his way.

You know that overused phrase, "it's so bad, it's good." Well, it doesn't apply here. Just kidding. Anyone who craves the 70's, CB's and custom vans might just like this terrible movie. Paul Chambers, CNN.

There are no featured audience reviews yet. Click the link below to see what others say about Super Van!