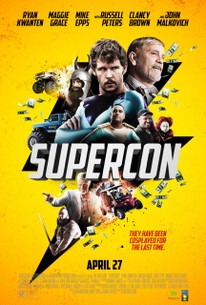 Another weekend, another comic convention for former TV actor Keith Mahar. Most people don't recognize Keith. His only claim to fame was as a child star in an 80's television show. Keith reluctantly joins his close friends,cartoon voice-over actor Matt,comic book artist Allison,and 80'sTV star Brock,who are also working the convention, but things take a turn for the worst when Keith's former co-star and Supercon's big ticket draw for the weekend - Adam King - decides to have this group fired and banned from the convention with the help of the convention promoter. This launches the friends on a crusade to bring down King and the promoter in the most epic way imaginable.

"Supercon" is a poor stab at Christopher Guest-style ensemble antics combined with a rote heist plot.

A crassly sophomoric spoof directed and cowritten by Zak Knutson that squanders a criminal amount of proven comic talent.

Though devoted fanboys may find it worth a chuckle or two on streaming outlets, most will find it as unsatisfying as a photo op with an extra from Star Trek V: The Final Frontier.

Supercon has its moments, although not nearly enough of them, and its grossest-of-gross-out scenes might be disgusting enough to cause John Waters to wince.

"Supercon" offers lip service to fan culture, yet it is difficult to imagine who would enjoy watching this ill-conceived satire.

It might entertain a rowdy teen boy but is likely to make pretty much everyone else roll their eyes.

Supercon is a fun watch that will bring some memories and some of the conventions ridiculousness to mind for those who have been or are current regulars.

There's a need for a snarky, cynical look at the con experience from the inside. Supercon could have been that film, but it went too low-brow to deliver on its potential.

The movie only forgets some actual comedy and to make the assorted heroes likeable. Other than that, it's still pretty bad.

Standing in line for three hours to pay $100 for an autograph is more fun thank this movie.

What makes the film fun is how it spoofs the whole world of fans eager to see the TV stars of their youth without making those fans the butt of the joke.

Utterly hopeless and downright lazy, unwilling to satirize the juicy details of the convention circuit (especially its vicious game of profiteering), preferring to slap poop on everything and call it a day.

There are no featured audience reviews yet. Click the link below to see what others say about Supercon!