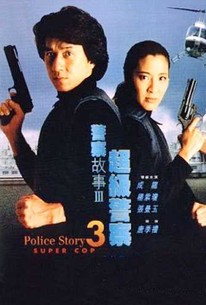 Critics Consensus: Blending hand-to-hand combat with breathtaking stunts and slapstick comedy, Supercop reminds us why Jackie Chan is one of the world's great entertainers.

Critics Consensus: Blending hand-to-hand combat with breathtaking stunts and slapstick comedy, Supercop reminds us why Jackie Chan is one of the world's great entertainers.

Critic Consensus: Blending hand-to-hand combat with breathtaking stunts and slapstick comedy, Supercop reminds us why Jackie Chan is one of the world's great entertainers.

Maggie Cheung
as May

Lieh Lo
as The General

If you're tired of burned-out coppers in Hollywood's blockbusters, try this offbeat hero from Hong Kong.

To watch Jackie Chan, Hong Kong's king of kung fu comedy, in the fresh and exhilarating Super Cop is like watching Douglas Fairbanks Sr. or one of the silent era clowns in one of their biggest hits.

Sly and Schwartzy, eat your hearts out. Chan's the man.

The most powerful starring role for a woman this summer? My vote goes to Michelle Khan in this garish, frenetic, and funny chopper from Rumble in the Bronx director Stanley Tong.

All this is executed with a good deal of panache, if not originality, by stunt coordinator Stanley Tong.

With martial arts superstar Jackie Chan, older may be better.

As with nearly all of Chan's films, this one boasts a comic quirk to the adventure - even something of a Chaplin-esque quality to the slapstick havoc.

Supercop is filled with wide shots and long takes making it clear that Chan and Khan really are out there on the edge performing those bone- crunching stunts.

This is riotous fun throughout.

A movie that shows Chan in top form.

By its second half, Supercop cranks up into such an extravaganza of fighting, blowing things up, spin-kicking, punch throwing and death-defying that it all but takes your breath out of your lungs and packs it up for shipment to Hong Kong.

The final half-hour makes it all worthwhile, and what makes Chan's work continually astonishing is that the actor does all his own stunts.

Great action, amazing stunt work. With a cast of Michelle Yeoh, Maggie Chung and Jackie Chan, it's hard not to enjoy.

Some of the best action sequences you will find in any movie. One of the high marks in both Jackie and Michelle's career.

Depending on your whereabouts in the world, this film may go under any one of the following titles: Supercop 2 (USA), Once a Cop, Police Story 3 Part 2, Police Story 4: Project S, Police Story V, Project S (UK), Supercop (also UK). Whatever the title, do not be fooled into thinking that this is a Jackie Chan film; yes, he does appear in the movie, but only briefly and in a scene that has absolutely nothing to do with the rest of the film. Michelle Yeoh, however, plays the same character as she did in Police Story 3 (which was known as Supercop in the US and did star JC?are you keeping up?), a hard-as-nails mainland Chinese cop named Yang. She is called to Hong Kong to lend her expertise and assist in the apprehension of a gang of Chinese criminals who are pulling heists right left and centre and peeing-off the local cops. The police operations are going swimmingly until Yang recognises one of the criminals as Cheng Feng, her boyfriend from China who left for HK to find his fortune, and the two become reacquainted under somewhat difficult circumstances. With a decidedly routine plot, Project S needed to be something special in the action department in order to compensate, but despite some cracking fight action towards the end, there is far too much quiet time spent between bouts. The action is also geared towards gun-play rather than martial arts, so those expecting a full on fight-fest will be disappointed. That is not to say that Yeoh and co-stars don't display some wonderful skills from time to time; the high kicking action is pretty good when it happens?it just doesn't happen often enough. The final half an hour, which has the gang attempt a daring bank robbery, offers the best dose of action, with Yang going up against a foe twice her size (and kicking ass, of course!). Director Stanley Tong and star Michelle Yeoh have both made far better films than this, but if your expectations are not set too high, you may find Project S a reasonable way to spend your time (although 105 minutes was a tad too long for me!).