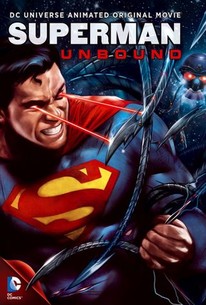 An unstoppable android on the horizon. A mysterious fireball hurtling toward Earth. A fearless - and beautiful - reporter who will stop at nothing to get her story. It's just another day for the heroic Man of Steel... only this time, for better or for worse, he has his unpredictable cousin, Supergirl, by his side. The gritty adventure begins as Superman learns about the ruthless force known as Brainiac, who has seized and miniaturized Krypton's capital city of Kandor.

Feels cinematic, despite the fact that it wasn't made for the big screen.

A worthy addition to the Superman library.

Another flawed, but fun animated film featuring the Man of Steel.

It ultimately takes a high place in the ranks of DC's direct-to-video line, exemplifying the kind of stories tailor made for this format.

Easily the best animated Superman movie to date, It had a good story that is easy to follow and it has some good action scenes too, A little more humour helped too, It was nice to see Brainiac being used well this time as a good main villain is what makes the film, Let's hope any future Superman animated movies can be just as good.

Feels like a cheap, almost overly convoluted excuse to watch Superman fly around punching drones and Brainiac in the face. The emotional aspect of SG's subplot is rather contrive as well, never really hitting a true heartfelt moment and almost comes off as a separate movie altogether in wake of Brainiac's threat. If you want to watch Supes punch things hard and explosions, sure, watch it. Frankly I see no merits in the movie other than a sub-par animated action-fest with a "War of the Worlds" cop-out ending.

Exciting and action-packed, Superman Unbound is an impressive animated feature from DC Universe. Based on the comic book series Superman: Brainiac, when Superman discovers one of Brainiacs drones in a meteor he leaves Supergirl to service in his stead while he hunts down the source of the drone and attempts to stop Brainiac from coming to Earth. The voice cast is rather good, and includes Matt Bomer, Stana Katic, and Molly Quinn. The writing is also well-done, and creates an interesting and compelling story. Additionally, the animation style is rich and full of color, which enhances the fantasy aspects of the film. Superman Unbound is a well-crafted and entertaining film that's full of adventure.

The machine is coming. Very good animated movie! A very well written and well crafted show with the talents of Matt Bomer as Clark/Superman, Stana Katic as Lois and the sexy Molly C. Quinn as Kara/Supergirl. What I did find as a pleasant surprise was that Brainiac was played by none other than John Noble who I haven't heard from since he appeared in the 'Lord of the Rings' saga. This was a great show which I look forward to watching again. An Unstoppable Android On The Horizon. A Mysterious Fireball Hurtling Toward Earth. A Fearless and Beautiful Reporter who'll stop at nothing to get her story. Its just another day for the Heroic "Man of Steel", only this time for better or for worse, he has his unpredictable cousin,"Supergirl" by his side. The Gritty adventure begins as Superman learns about the ruthless Force known as "Brainiac", who has seized and miniaturized "Krypton's" capital city of Kandor. Determined to liberate the captured Metropolis and protect his home planet from Braniac's increasing power, Superman takes on his most menacing enemy yet in this DC Animated original Movie Based on the Gripping Comic Book Miniseries.