Supermensch: The Legend of Shep Gordon2014

Supermensch: The Legend of Shep Gordon (2014) 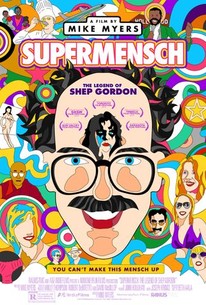 Critics Consensus: Its unabashedly positive tone may strike some viewers as disingenuous, but even if Supermensch doesn't tell the whole story, it's an undeniably entertaining one.

Critics Consensus: Its unabashedly positive tone may strike some viewers as disingenuous, but even if Supermensch doesn't tell the whole story, it's an undeniably entertaining one.

Critic Consensus: Its unabashedly positive tone may strike some viewers as disingenuous, but even if Supermensch doesn't tell the whole story, it's an undeniably entertaining one.

Shep Gordon is the consummate Hollywood insider. Though he isn't a household name, Gordon has become a beacon in the industry, beloved by the countless stars he has encountered throughout his storied career. Shep is known for managing the careers of Alice Cooper as well as stints with Blondie, Luther Vandross and Raquel Welch, among others - a career that began with a chance encounter in 1968 with Janis Joplin and Jimi Hendrix. He even found time to invent the "Celebrity Chef." Though the chef as star is part of the culture now, it took Shep's imagination, and his moral outrage at how the chefs were being treated, to monetize the culinary arts into the multi-billion dollar industry it is today. Personal friends with the Dalai Lama through his philanthropic endeavors with the Tibet Fund and the guardian of four children, Gordon's unlikely story will be told by those who know him best, his pals, including Alice Cooper, Michael Douglas, Sylvester Stallone, Anne Murray, Willie Nelson, Emeril Lagasse and more. (C) Radius

News & Interviews for Supermensch: The Legend of Shep Gordon

View All Supermensch: The Legend of Shep Gordon News

Critic Reviews for Supermensch: The Legend of Shep Gordon

Soon, however, it becomes heavily tinged with melancholy about Gordon's unfulfilled dream of having a family of his own. Interesting guy.

This documentary portrait by Mike Myers (of Wayne's World and Austen Powers fame) of his friend Shep Gordon comes close to hagiography but is just about saved by great anecdotes, stylistic inventiveness and the low-key charm of the man himself.

What could have been a very gooey, toe-curling exercise in self-congratulation is lifted by Shep Gordon himself.

It makes for a lively, entertaining guide to the LA music scene in the 70s and 80s and the film business - Gordon dabbled in movie production.

An unvarnished look at his life in and outside of the spotlight.

As far as documentaries go, it's a loving tribute from one close friend to another.

Never outstaying its welcome, Supermensch is akin to spending a hour and half in the presence of a true raconteur.

Myers gives us the cinematic equivalent of a tabloid; it's fun, gossipy and light, but in the end is only supermeh.

Because of pop-culture societies' overwhelming affection towards Shep, Supermensch plays more like a tribute film than an observational one, so what it lacks in depth, it makes up for in light-heartedness and simplicity.

He's brilliant! He's funny! He's a genius! He's a total lothario! This is seriously the only thing anyone says for the entire convulsing 1 1/2 hours.

Audience Reviews for Supermensch: The Legend of Shep Gordon

Most of the buzz around this documentary comes from its director: Mike Myers. Out of the spotlight for many years (following several box office bombs) Myers has turned his energy to the world of directing, and in particular to a giant in the industry: Shep Gordon. A man who has managed everyone from Alice Cooper to Emerill Lagasse, this famous manager has a buttload of stories, and is finally given a way to tell them. Read more at http://www.bluefairyblog.com/reviews/2015/4/26/supermensch-the-legend-of-shep-gordon