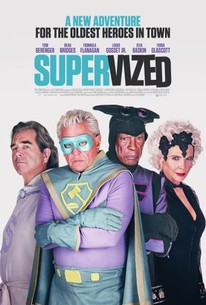 SUPERVIZED tells the story of an elderly group of international superheroes retired to Dunmanor nursing home in Ireland. Ray is the once world renowned 'Maximum Justice' who as his nom de plume suggests will fight bad with good till the cows come home. He finds it hard to accept that his hero days are over and now it's bingo games and blanket baths. His old team consisting of trusted sidekick Ted AKA 'Shimmy', old flame Madera 'Moonlight' and rival at everything Pendle 'Total Thunder' are far more accepting of their undignified destiny. When Jerry, 'Rainbow Warrior,' dies after having his superpowers 'downwardly managed' for the safety of others, a federation sectioned procedure, Ray suspects foul play and decides to investigate. The rest of the gang are not so convinced, and Ray finds himself battling against not only his enemies, but the stigma and restrictions of old age.

Clive Russell
as Jerry
View All

To an extent and for a while, the film gets by primarily on the strength of its tepid and uneven humor. However, when it's forced to draw on comic book tropes, it loses steam.

A genial comedy that'd be easier to like if it weren't so excruciatingly unfunny.

Supervized is never quite as inspired as it should be, but it offers some amusing moments along the way.

Supervized is a sophomoric comedy which never takes advantage of its own originality.

Supervized is mostly harmless and features a nasty streak and a darkly humorous edge that is enjoyable in small doses. But the senior citizen tropes diminish the script.

Supervized gets quite a few things right, especially considering its inherently silly, B-movie origins. It deals with memories, aging, finding a purpose, and coming to terms with death.

This is a crude, R-rated farce full of promise, but Supervised is one word that doesn't seem to have been applied to the script.

The weirdness of it all is reasonably compelling, watching Barron return to the genre that secured his career, locating a different corner of comic book destruction to explore.

With an energetic but never breakneck pace, the film is steadily entertaining, especially when it finds comedy in the characters. The cheap gags aren't quite as funny.

Rich Cline
Shadows on the Wall
View All Critic Reviews (9)

There are no featured reviews for Supervized at this time.