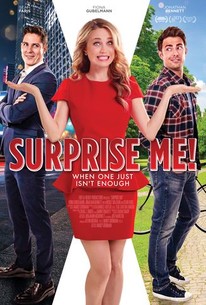 Genie is a surprise party planner who hates surprises. Her partner Steven calls her out on every issue she owns. Danny would be perfect for her but she keeps him in the friend zone. Along comes Jeff. Everything she avoids--until now. Meanwhile, Surprise Enterprise is hired by an anonymous Hollywood producer to throw a surprise wedding for his girlfriend. Genie must get her down the aisle without telling her she's the bride. Jeff wants a commitment. Danny's girlfriend is super annoying. Cookies and cereal summon Genie every night with a vengeance. In the end, Genie discovers that with life, with love, and crazy cravings, what's real in life screams... SURPRISE!

Critic Reviews for Surprise Me!

Supporting player Nicole Sullivan sparkles in this rom-com. The leads? Not in the least.

Surprise Me!, the new film from writer/director Nancy Goodman, feels like more of the same, but it's got a unique subplot that deserves your attention.

You might not scream at the big screen, but don't be surprised if your inside voice wishes for a much better rom-com.

Surprise Me! beats a little life into its contribution to the very crowded market of Rom-Coms. The film is good and will appeal to fans of the genre, but doesn't do enough to transcend it...

Contrary to Gertrude Stein, there is some there here, but it's inscrutable.

There are no featured reviews for Surprise Me! at this time.