Survival of the Dead2010 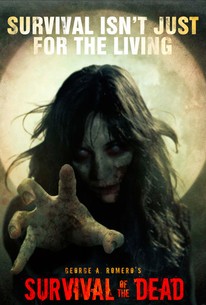 Critics Consensus: Survival of the Dead offers glimmers of Romero's savage wit, but not nearly enough to make up for his unusually uninspired directing and a lack of new ideas

Critics Consensus: Survival of the Dead offers glimmers of Romero's savage wit, but not nearly enough to make up for his unusually uninspired directing and a lack of new ideas

Critic Consensus: Survival of the Dead offers glimmers of Romero's savage wit, but not nearly enough to make up for his unusually uninspired directing and a lack of new ideas

Survival of the Dead Photos

A group of rogue soldiers seek shelter from the zombie apocalypse on scenic Plum Island, only to become caught up in a bitter feud between two warring families. Sarge Crocket (Alan Van Sprang) and his motley crew of military abandoners are searching for a safe place to rest when they cross paths with Patrick O'Flynn (Kenneth Welsh). O'Flynn has been banished from Plum Island, where his family is locked in a longtime quarrel with the Muldoons. The O'Flynns see the flesh-eaters as subhuman, never hesitating to put a bullet between their eyes; the Muldoons balk at the prospect of killing their gut-munching loved ones, instead opting to care for their rotting kinfolk until scientists find a cure for the undead scourge. As the division between the two families grows deeper and wider, Crocket and his men realize that on Plum Island, the zombies are the least of their worries.

Julian Richings
as James
View All

News & Interviews for Survival of the Dead

View All Survival of the Dead News

Critic Reviews for Survival of the Dead

Even Romero's staunchest fans might conclude their hero is going through the motions here. Yes, almost like a zombie.

What we've got here is a just a B-movie western with buckets of gore, which might be fine coming from a Romero wannabe but not from the genuine article.

There's something here for enthusiasts to enjoy, but to newcomers or those lacking an appreciation for Romero's work, Survival of the Dead is a zombie soap opera.

Survival of the Dead almost never snaps into focus. Even its oxymoronic title doesn't work. It feels marginal, like an extended footnote.

Like a zombie version of his previous movies %u2013 feeding off what came before and just not quite all there.

You will laugh and you will groan but who will survive Survivial of the Dead? Zombies? Mankind? Or you?

At 70 years old, Romero remains the grand master of the zombie movie and Survival of the Dead proves he is still more than worthy of the title.

A weak addition to the zombie series that suffers from bad acting, a poor script and a distinct lack of action.

This is exactly what makes Romero a great political filmmaker: when he condemns wrongs, he never assumes those wrongs exist on their ow.

...he whole film feels like a perfunctory, wearied repetition of a formula.

Audience Reviews for Survival of the Dead

A squad of AWOL soldiers happens upon a remote island inhabited by two feuding clans with very different ideas of how to deal with the zombie holocaust. I'd love to say that the latest in George Romero's spiralling Dead franchise has finally stopped the rot, but I'd be lying. Survival Of The Dead's recipe of weak slapstick comedy and cartoon gore turns the once fearful zombies into something of a deeply un-intimidating joke and I wish that just ONCE, a Hollywood casting director could actually cast an actual Irish actor instead of just assuming that an American drawling "Oi'm frum Oireland t'be sure" is good enough. The uninspiring small screen cast are very difficult to care about and I would describe the amateurish feel of the whole thing as "TV standard" if The Walking Dead hadn't come along and proven how high "TV standard" has become over recent years. Instead of witty, insightful satire Romero has chosen to turn The Dead series into a cross between The Munsters and The Beverly Hill Billies and the addition of a half-baked message about nationalism at the very end just doesn't cut it. Easily the worst of the series and I'm sad to say that it's about time he called it a day because it's just getting a little embarrassing now.

Not my favourite zombie movie at all, in fact it was pretty terrible and even if your a huge zombie fan you may want to avoid this movie.

Well, he did it. George A. Romero finally somehow managed to make a zombie movie that I can't bring myself to recommend. It's sad too. I mean, Land and Diary weren't as good as the original trilogy, but they were still pretty decent movies all things considered. Depending on certain factors (since I'm a little wary of change), I kinda like it when a band or director I like does something different. And that's the case here, where the film is basically The Hatfields and McCoys plus Zombies. Also different is that there's little if any real subtext here, unlike the previous films, and this is also the closest that the series has come to having a direct sequel since the main characters here plaed a small role in the previous entry. This film follows a group of mercenary national guardsmen (and lady) who robbed the protagonists of hte previous film. Here, they are deserters just looking to find a better place and situation. They make their way to an island off the coast of Delaware inhabited by two feuding Irish families who have differening views on how to deal with the zombies. This all could have been some very compelling stuff, but it never turns out to be that way. The film feels unfocused and incomplete. There are traces of substance, but no real hardsocial commentary, and what is there comes off as half formed. There's some humor here, whic his fine, but more than I fiured there'd be, and tonally, (and I hate using this comparison) this feels A LOT like Jason X. The humor also comes off as silly and doesn't work that well. Also, the acting is all over the place. So, with all of that, you might be wondering why I've not given it a lower score. Well, it's got violence and gore, and some rather interesting ways of killing zombies. A couple of the kills have some painfully bad cgi effects, which sucks, but still, they are at least creative. Also, I kinda liked the pseudo sequel idea. There's some okay ideas here, but it just feels like George has really run out of ideas and confirmed what many have known for a while now that he's pretty much just phoning it in. I did like that there's a random and pointless scene of the female soldier breifly masturbating though. Sigh. It's odd. This isn't that good of a film, but I was never really bored. That's especially odd since this film isn't always that interesting. Maybe it's just my love for the man and his past films. See this only if you're a completist, or if you feel you really have to. Otherwise, just pass.

Coming as a huge surprise to absolutely no one, Survival of the Dead really sucks, barely functional as a slow-paced zombie action film and absolutely nothing else. No scares, no drama, dull characters, feeble gore, uncreative zombie death set pieces...aside from the visceral thrill of watching people of various ages and occupations gun down the living dead, and the vicarious thrill that I personally get whenever I watch a zombie movie ("what would I do?" is always the best part, in my opinion) there is absolutely nothing here worth seeing. Romero's excessive hype of both this film and Diary of the Dead are clear indicators that he simply doesn't have his finger on the pulse of the genre anymore, and the only virtues of his two most recent films are merely to show how far he's fallen. Sad.

Survival of the Dead Quotes