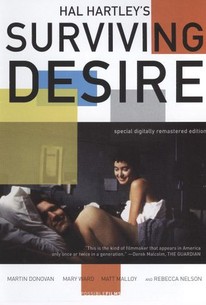 Made for PBS' American Playhouse, Surviving Desire is a very short romantic comedy starring Martin Donovan and Mary Ward. He's an uninspired college literature professor. She's a kooky student, and the only member of Donovan's class who doesn't doze off during his lectures. The comedy relies upon the inevitable pairing of two vague, aimless, but very recognizable campus types. The videocassette version of Surving Desire is filled out with two other short subjects directed by Hal Hartley.

Mary B. Ward
as Sophie

There are no featured audience reviews yet. Click the link below to see what others say about American Playhouse!