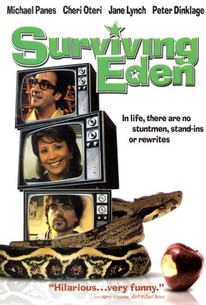 A reality show contestant who lost 150 pounds and gained a cool one million dollars falls prey to the capitalistic excess of the jet set as Dummy director Greg Pritikin sets his satirical sights on the Hollywood hangers-on who linger for far too long after their 15 minutes are up. Dennis Flotchky (Michael Panes) was an overweight loser with no money and few friends when he first applied for a role on television's top reality game show. All of that quickly changes, however, when Dennis endures to outwit, outlast, and outplay his fellow contestants while simultaneously dropping the majority of his excess weight and becoming a millionaire in the process. Now a celebrity wannabe whose face fills the tabloids and whose fortune is fast being depleted, Dennis must make a quick recovery before the vultures circling overhead swoop down to pick him clean of every last penny and tear away every remaining ounce of his self-respect.

Brian Gattas
as Brisbee
View All

Reality TV, says one character in Greg Pritikin's Surviving Eden, makes you stupid and ill. The movie tries hard to prove it.

Although early scenes hold out some promise that this parody of Survivor could amount to something, the movie quickly runs out of ideas.

Surviving Eden is the sort of hapless vanity project where even the outtakes at the end aren't funny.

Writer/director Greg Pritikin has created a reality-TV satire as clueless as the self-impressed 'stars' it scorns.

The movie insists that we care deeply about its sad sack protagonist as some sort of Chaplin-esque victim of vanity and greed. But neither Pritkin's conception nor Panes' performance warrants such sympathy.

This witless satire dares to take on the culture of -- get ready for this -- reality TV!

If not a gift to audiences, it is an unintentional trove of how-not-to tips for aspiring filmmakers.

The tribal council has spoken: this is a funny movie.

This comedy could use some polishing. With a little more style it could have been better, but there is a decent film inside this one somewhere.

Only Lynch's over-the-top network executive stands out in this otherwise bland film that tries for satire but neglects to be funny.

No script, no stars, no nothing. What could go wrong?..Just because nothing did doesn't mean that the film is good.

There are no featured audience reviews yet. Click the link below to see what others say about Surviving Eden!