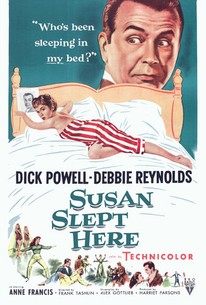 Susan Slept Here is the only feature film in Hollywood history ever to be narrated by an Academy Award. After introducing itself, the Oscar statuette invites us into the apartment home of its owner, screenwriter Mark Christopher Dick Powell. Knowing that Mark is working on a script about juvenile deliquency, policeman Sam Hanlon Herb Vigran deposits teenaged troublemaker Susan Landis Debbie Reynolds on Mark's doorstep. Somewhat terrified by Susan's erratic behavior, Mark vows to keep their relationship platonic, but his fiancee Isabella Anne Francis suspects the worst. Director Frank Tashlin aims his satiric barbs at psychiatry, conspicuous consumption and Hollywood itself. The spirited supporting cast includes Glenda Farrell, Alvy Moore, Horace McMahon and Les Tremayne.

Billy Halop
as Waiter
View All

Some 97 minutes of well-farced escapism is offered in Susan Slept Here.

On the whole, "Susan Slept Here" remains as familiar as a summer breeze, but not nearly as refreshing.

This started life as a Broadway comedy and remains very theatrical, despite Tashlin's efforts to goose it into life ...

Some of the gags about 50s Hollywood are priceless (among them a parody of Gene Kelly's dream ballets).

Hollywood pictures, I still doggedly maintain, are slowly improving on the average, but I couldn't clinch the argument by citing the present specimen. It's a coy, leering and overdrawn comedy.

It's a surprisingly bad outing considering all the talent involved.

One scene finds Debbie Reynolds using the golden head of the trademarked Oscar statuette as a makeshift hammer to crack walnuts. In Hollywood, that may have been as shocking as the sight of the desecrated statue of the Virgin Mary in 'The Exorcist.'

Cotton candy confection with Debbie bright and chipper. Something from a much more innocent time with for that time a slightly risque story, although the fact that Debbie was actually 22 and looks it not the 17 the script indicates removing much of the ick factor. Skillfully played by all with Glenda Farrell very amusing in support and Anne Francis a knockout in an eyepoppingly elegant wardrobe.