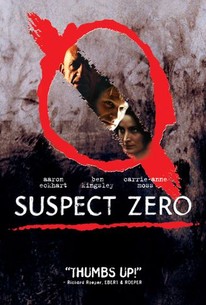 Critics Consensus: Other than Ben Kingsley, there's not much to like in this preposterous thriller.

Critics Consensus: Other than Ben Kingsley, there's not much to like in this preposterous thriller.

Critic Consensus: Other than Ben Kingsley, there's not much to like in this preposterous thriller.

Directed by E. Elias Merhige, Suspect Zero follows the disgraced FBI Agent Thomas Mackelway (Aaron Eckhart), who was transferred to a desolate area in Albuquerque, New Mexico as punishment for botching a procedure which ultimately led to the release of one of the most notorious criminals on the FBI's list. Mackelway is given an opportunity to redeem himself, however, when he is called in to investigate the strange murder of a traveling salesman. Mysteriously, the mark of a circle with a line through it is the only clue that the killer left behind. Before long, the prime suspect is identified as former agent Benjamin O'Ryan (Ben Kingsley), who is seemingly obsessed with hunting down serial killers and murdering them rather than turning them in to the proper authorities. Though Mackelway believes he knows the area where O'Ryan (Kingsley) is living, he has no idea what he looks like -- a problem that the rogue agent exploits with great success. Despite his brilliance, Mackelway finds himself caught in a psychological labyrinth of sorts, and is faced with an even greater quandary after learning that O'Ryan is looking for none other than Suspect Zero, a murderer of hundreds and the FBI's most wanted man. The supporting cast includes Carrie-Anne Moss and Harry J. Lennix.

William B. Johnson
as Mel

Michael Chapman
as Prosecutor No. 1

Slips on the banana peel of exaggerated fear factor, falling facedown with the introduction of an über-creep serial killer (Ben Kingsley) grimly stalking some hapless prey.

[A] visually jarring, psychologically daring trip that explores terror in a fresh, if crazy, manner.

Instead of building suspense and tension, Suspect Zero devotes its efforts to creating a weird and creepy milieu that will leave fans of police procedurals wanting and avant-garde enthusiasts scratching their heads.

Its junkiness shines through its posh patina. Exploitation is just no fun anymore, now that it's all so damn tasteful.

A grisly, depraved and wholly uninvolving exercise in empty mannerism.

Suspect Zero is that rare case of a dull idea redeemed by sharp talent.

Essentially an X-files episode that wishes it were as disturbing and visually arresting as David Fincher's Seven (it's not).

...one of those seemingly foolproof flicks that just doesn't work...

A poor man's 'Silence of the Lambs' crossed with 'Insomnia.' And that makes it at least a decent popcorn movie.

The whole thing would have been over a lot quicker if they had only called in Mulder and Scully.

Suspect Zero is trying so hard to be deliberately stylish that it forgets there's an interesting premise underneath all that vanity.

Cast: Aaron Eckhart, Ben Kingsley, Carrie-Anne Moss, Harry Lennix, Kevin Chamberlin, Julian Reyes, Keith Campbell, Chloe Russell, Ellen Blake, William B. Johnson, Jerry Gardner, Daniel Patrick Moriarty Director: E. Elias Merhige Summary: A killer is on the loose, and FBI agent Thomas Mackelway is on the case, sifting through clues to uncover the criminal's identity. But there's one unusual twist: The bloodthirsty felon's victims of choice are other serial killers. My Thoughts: "Although it was a new take on serial killing and one I thought was very interesting, the film just wasn't great. Far from it. There is no thrill in this thriller and it needed it. The casting is great, its the writing and directing that leaves something to be wanted. The idea of the film is unique but unfortunately it wasn't executed as well as it could and should have been. A miss that could have been a hit."

While Aaron Eckhart and Ben Kingsley bring great performances, it is not enough to overcome the sappy writing that includes the "I slept with my partner" sub plot that adds nothing to the story more than the cliche former lovers working together drama. Too much fiction in the science fiction part of this story does not help either.

Suspected it to be good but got a real ZERO for that. Surely worth a miss!!!