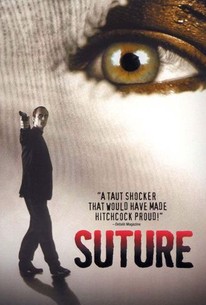 Shot in black-and-white, this neo-noir begins at its end, by asking the question: how is it we come to know who we are? Involving an unusual identity play, the film goes about answering its opening question through a fascinating meditation on race. When Vincent (played by white actor Michael Harris) reunites with his estranged and unknown half-brother Clay (played by black actor Dennis Haysbert), the film quickly establishes an interior logic whereby the two men appear identical within the boundaries of the film. Further complicating matters, when Vincent's botched attempt to murder Clay and pass off the body as his own leaves Clay with amnesia and in need of reconstructive plastic surgery, Clay emerges and assumes the identity of Vincent. Having his African-American lead join Clay's white, upwardly mobile world, director David Siegel plays on stereotypes with great success, calling into question not simply how we come to know who we are but how we come to know what we see.

Mel Coleman
as Sportsman
View All

It pivots on questions of what constitutes identity-the internal stuff of life or the external components of race, wealth, and status.

a bold, confident debut that knows exactly what it is, and has a lot of fun letting its viewers reconstruct and reconcile its separated pieces. For here everything - and nothing - is black and white.

It's the kind of movie that holds your attention and is splendid to look at, but after it's over you feel empty, because there wasn't much there, really, except for the visual ideas.

A quality film that never quite found the audience it deserved.

This is neo-noir at its strangest and boldest.

McGehee and Siegel unfold this deep psychological tale with blurry flashes and flashbacks from Clay's fragmented mind. The scenes in the present have an unfocussed look, too. It is all rather like a B-picture from the '50s.

This stylishly elegant neo-noir, an impressive feature debut, reflects the directors' interest in issues of memory, identity, and racial biases and their background in art history.

A story of murder, amnesia, dreams, and mistaken identity well crafted, along with the stylish black and white cinematography. However, for this film to make the most sense, it would help if you pay no attention to these visuals, since some things may not make any sense. What could've played as a wonderful homage to Alfred Hitchcock thrillers instead turns out a film school graduate effort in cinematography. The plot is simple, but the actors and narrative are flawed. The film is sort of like a Boston album; technically it's great, but the music isn't very interesting.