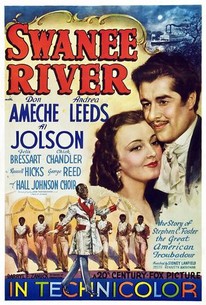 This musical presents a romantic and sanitized biography of distinguished American songwriter Stephen Foster. The story begins with the romance between Foster (Don Ameche) and a pretty southern belle and sets up a home in Kentucky--actually the real Foster married a girl from Pittsburgh. His songwriting career takes off when he sells a song to the famous minstrel E.P. Christy (Al Jolson). His career takes off until the Civil War erupts. Accused of siding with the Confederates, Foster and his family flee to the North. There, he begins to literally drink himself to death. The Oscar-nominated soundtrack feature some of Foster's most loved standards including the title song, "Camptown Races," "Oh, Susanna" and "My Old Kentucky Home." ~ Sandra Brennan, Rovi

Beautiful and poetic to the utmost degree. [Full review in Spanish]

There are no featured reviews for Swanee River at this time.