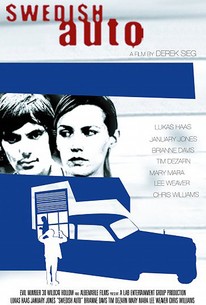 A loner with a secret life discovers that someone wants to intrude on his solitude in this independent drama. Carter (Lukas Haas) is a shy and introspective young man who works as a repairman at an auto garage alongside Leroy (Lee Weaver) and his son, Bobby (Chris Williams). When he's not fixing cars, Carter devotes most of his time to following Ann (Brianne Davis), a pretty girl who plays the violin and doesn't seem to have any interest in him. Despite this, Carter trails her wherever he goes and regularly hides beneath her window so he can hear her play. While Carter worships Ann from afar (or not so afar), he has a stalker of his own, Darla (January Jones), a girl who waits tables at a diner near the auto shop and is obviously fascinated with him. A misplaced astronomy text makes Carter aware that Darla has been following him, and they edge into a cautious romance. Swedish Auto was the first feature film from writer and director Derek Sieg.

There are no critic reviews yet for Swedish Auto. Keep checking Rotten Tomatoes for updates!

A grown-up Lukas Haas and January Jones headline this quiet little film of two damaged souls who find each other and develop a relationship in fits and starts. Quite enjoyable character study.

A weird little indie whose opening premise, stalking, is offputting. Then, in a kind of stalker fantasy, the perpetrator (Lucas Haas) finds he himself is being stalked ... by a pretty blonde (January Jones). That this should lead to a romance is no stranger than the opening. Thank goodness one subplot is about the affection for Swedish automobiles or I'd've been tempted to be repulsed by this, and I didn't even mention the stepfather raping his stepdaughter constantly. It's only a movie.