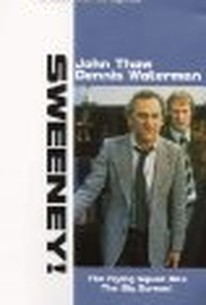 In this feature-film version of the popular British television cop show, Regan (John Thaw) and Carter (Dennis Waterman) are two British Scotland Yard detectives who find themselves involved with the exchange of oil resources on the political and economic fate of the world. Ian Bannen plays Baker, an alcoholic foreign minister involved in a scheme to manipulate a worldwide oil crisis to his benefit. ~ Paul Brenner, Rovi

Anthony Brown
as Superintendent
View All

The story itself is sturdy enough. Where the movie errs is in the character of Regan, who always had a hidden soft side on the series but is presented here as an unsympathetic lout.

The end result is a very entertaining film that arguably doesn't work fully as either The Sweeney or bleakly cynical thriller but is still very good fun.

Thaw, and Joe Melia as an East End crook, do their best but are knee-capped by a witless script.

There are no featured reviews for Sweeney! at this time.