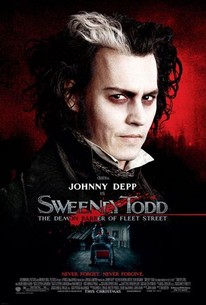 Critics Consensus: Full of pith and Grand Guignol grossness, this macabre musical is perfectly helmed and highly entertaining. Tim Burton masterfully stages the musical in a way that will make you think he has done this many times before.

Critics Consensus: Full of pith and Grand Guignol grossness, this macabre musical is perfectly helmed and highly entertaining. Tim Burton masterfully stages the musical in a way that will make you think he has done this many times before.

Critic Consensus: Full of pith and Grand Guignol grossness, this macabre musical is perfectly helmed and highly entertaining. Tim Burton masterfully stages the musical in a way that will make you think he has done this many times before.

Unjustly sent to prison, a man vows revenge, not only for that cruel punishment, but for the devastating consequences of what happened to his wife and daughter. When he returns to reopen his barber shop, he becomes Sweeney Todd, the Demon Barber of Fleet Street, who "shaved the faces of gentlemen who never thereafter were heard of again." Sweeney's amorous accomplice, Mrs. Lovett, creates diabolical meat pies.

Gracie May
as Johanna

Jody Halse
as Policeman #1
View All

It keeps getting bloodier by the scene, yet remains curiously engaging.

Without any warmth and humor at all, how are you meant to care? I'm not saying you always have to care about someone in a movie - not at all - but here the story is so ludicrous that, unless you can, why bother?

This is grand-scale studio-work at its most beguiling.

This is a remarkable piece of work for people who like their genres all mashed together in a meat grinder.

A considerable achievement even if, on balance, it's more of a Tim Burton phantasmagoria than a Sondheim fantasia.

As unsettling as it is riveting. Even Sondheim aficionados will see the story with fresh eyes, unless those eyes are covered.

Burton delivers quite the engaging musical that overflows with his signature aesthetic style. Sweeney Todd leaves its mark on the genre. [Full review in Spanish}

More visually stunning than musically memorable, but it nevertheless presents a grandly ghastly tale of love and retribution in a style unlike any before it.

Burton has never been so scary. [Full review in Spanish]

Tim Burton and company have indeed reinvented a wondrous work with an extraordinary vibrancy and vivacity that is to die for. So make a date to meet up on Fleet Street where morality and madness meet.

A brilliant mix of beauty and horror, shot in near-monochromatic tones by cinematographer Dariusz Wolski and deftly blended and juxtaposed by Burton.

I normally don't like musicals but "Sweeney Todd" is an exception. The story is powerful and is accompanied with some decent songs. It gets brutal at times and the meat pies are downright disgusting. But still, it's very entertaining.

A musical slasher flick that is just beyond fun. This is Tim Burton and if you dont care for him dont watch but if you do this is a good one.

ennui - i'm done with the burton / depp show. just another vehicle for same - albeit a witty tuneful one.