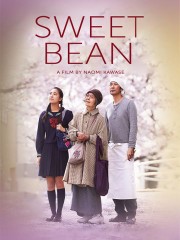 William K
½ May 5, 2019
Heartfelt and well-cast drama about the unlikely friendship of three outcasts subtly explores social restraints and what it means to deal with them.

BO L
June 14, 2018
This movie doesn't force excessive sadness to convey the touching story of the life of an elderly woman who suffers from leprosy. It also focuses on the artisan spirit of making Dorayaki and the friendship between people. I like how the movie stayed simple and calm as the story unfold. The ending was somewhat typical but I believe it depicted well the many flaws of our society. I really loved this movie because it was able to broache some serious topics by staying at the same time light hearted and true at its core.

Jon T
½ May 22, 2018
It's all the good things reviewers say but it is suffocatingly claustrophobic and very slow. I get the point about intolerance but l wonder how many people would be happy to be served food by someone with leprosy. Hmmm....

May 6, 2018
Such a beautiful film, that show the fragility of life, that people need to see the error of their ways, and love and kindness are clearly the only ways to win.

This film has just a great story and cinematography that even without the subtitles I could still understand the acting, and the many stories and lessons this film had to offer.

PURE BEAUTY IN EVERY SHOT

Andrew K
April 1, 2018
A charming film which highlights the wider impacts of discrimination. I loved the characters and the way in which the atmosphere of the place was so well captured.

Yannick D
November 24, 2017
I feel torn. One the one hand a sincerely touching and profound experience, the film is ultimately let down by its final shot where you realise that Kawase wrote herself into a corner. A shame but also not enough to completely taint the soothing goodness that preceded it.

Viet Phuong N
May 26, 2017
The plot felt forceful in some parts, but the acting is deeply sincere, heart-warming, and more than enough to offset the melodramatic cliches of this film. The cinematography is also simple yet stunning in revealing the seasonal beauties of Japan. All in all, a very satisfactory and humanistic film.

Joey B
April 22, 2017
A beautiful offering from Japan, this 2015 film arrived to the U.S. a year later. Now available streaming online, it is one that I highly recommend to everyone who loves what seems like a simple story, but filled with so much heart you can spread a paste on it and munch it down! A friendship develops between an emotionally shut-down young man who runs a pancake quick-food stand and an elderly woman who is somewhat mysterious and as the story begins to develop along with their friendship, a look at a shameful past in Japanese history is revealed. Note: iTunes, YouTube, Amazon, GooglePlay...plunk down the $3.99 and give your heart a sweetness it deserves.

Jonan G
½ November 12, 2016
Very sweet, gentle and plodding, Sweet Bean immerses us in the day-to-day of ordinary folk, and made me think on what really are the important things in my life. It's easy to get stuck in the work rut, just putting my head down and getting stuff done with an eye to getting that paycheck, but there's pleasure and reward to be had in taking pride in my work.

Tino R
November 2, 2016
so beautiful and enchanting like Sakura...

Dean B
October 11, 2016
Beautiful and full of love. Oh, and reveals the meaning of life. Also full of quiet grief like many great Japanese films. Spend an evening becoming a better, happier person.

Lloyd T
September 4, 2016
I love that a simple story could say so much three generations of characters living as castoffs in Japanese society.And small, tender moments could have the greatest impact. A must-see for those rooting for Japanese film to make a strong comeback with global movie-goers.

Myrna G
August 28, 2016
This is a beautiful Japanese movie, with a touching story.

Rangan R
August 17, 2016
Encountering an unexpected and its impacts forever.

The Japanese foods considered as the healthiest food in the world. Yes, it's a food and restaurant related theme, and those who loves them should give it a try. It was another film like 'Midnight Diner' that I saw a couple of months back, which focused on a small eatery as this one. What fascinated me was its simple storyline and the realistic approach. It was based on the novel of the same name of the original Japanese title 'An' which translated as 'Bean Paste'. It is not just a food film, but well explored relationship of the people from different generations. This is quite common I found in the Japanese films, yet very distinct from other similar ones.

There were three characters in the films that kind of represents past, present and future. Where they all learn some important lessons from each others. I don't know that was intentionally done, but that is how I saw it. The most of the story's perspective was from the middle aged man, Sentaro who runs a small dorayaki shop which regularly visited by the students of the nearby school and the locals. His story is kind of depressing. Not the film, just what he went through in his life and after that his life remained quite a low without an alternative. Though, there were no flashbacks, but just revealed by orally when the right time comes.

One day a very old woman named Tokue comes asking for a job after seeing the signboard outside the shop and somehow she manages to grab it. Later she teaches him to make his own bean paste. This is the part I like very much, because it might have not revealed fully how to make a bean paste, but definitely you would feel you want to taste it right away when you see the beautifully prepared paste filled in the tray. So I won't be surprised if you visit a Japanese restaurant just to make your first taste of dorayaki or whenever you visit there, remember this film and ask for it.

"It's like a first date, the young couple needs to get friendly."

So with such a development, the film takes a leap to the next stage of the story. Where the shop sees the rise in customer influx and by its success, Tokue offered to stay and help further. On the other side a middle school girl, Wakana who has not decided about her future, whether to attend the high school or get a job in Takue's shop which obviously went to the old woman. In the meantime, all the three develop a close relationship to each other in the short time. Despite from the different social group, but the strong connection with the shop. But one day as the gossip spreading like a wildfire all over the town about the shop, followed by a couple of unexpected events, the story nears to its end part with an emotional episode.

The most of the film looked like a poetry. The director, who also wrote the screenplay did an awesome job. The cast's performances were outstanding. I have seen them all in different films, even though I did not recognise them at first. I think it is the actors and the wonderful cinematography that made this film looks better than its story. People put their recipe in a book and publish them or make the videos and release online, but I think this kind of film is definitely would make lot impact on, even for the non-food lovers to have a close look which would generate a serious desire and hunger. Just like 'The Ramen Girl', but not as good as this one. A film that preserves a precious dish digitally and makes reach corners of the world.

By now you know that I loved it, but there's something I did not like from it which is the third act. Actually, that final act was a bit drag. Compared to the earlier sections, those last 20 or so minutes were quite an unnecessary stretch. I am an easy prey to sentimental scenes, but for this film I did not feel a thing. Other than that, how it all ended pretty neatly wrapped which I applaud loudly.

Whatever I said all the good and bad stuffs about it, there are some other topics as well in it which came as a side message, but that overtook everything on the final stage and ended as it was the centre of the story like that about treating an older person with disability. I had said many times before in my earlier reviews that I easily fall for seeing the old people suffering which happened in this. So heartbreaking. Except a very few defects that affected me which might won't make a big deal for others, I recommend the film, especially for the drama fans and food lovers.

Ken C
August 17, 2016
Simplistic of this intimate, beautifully film is like a curtain to reveal something a little more knotty.
Page 1 of 2