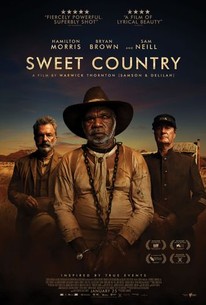 Critics Consensus: Sweet Country makes brilliant use of the Australian outback as the setting for a hard-hitting story that satisfies as a character study as well as a sociopolitical statement.

Critics Consensus: Sweet Country makes brilliant use of the Australian outback as the setting for a hard-hitting story that satisfies as a character study as well as a sociopolitical statement.

Critic Consensus: Sweet Country makes brilliant use of the Australian outback as the setting for a hard-hitting story that satisfies as a character study as well as a sociopolitical statement.

Sam, a middle-aged Aboriginal man, works for a preacher in the outback of Australia's Northern Territory. When Harry, a bitter war veteran, moves into a neighbouring outpost, the preacher sends Sam and his family to help Harry renovate his cattle yards. But Sam's relationship with the cruel and ill-tempered Harry quickly deteriorates, culminating in a violent shootout in which Sam kills Harry in self-defence. As a result, Sam becomes a wanted criminal for the murder of a white man, and is forced to flee with his wife across the deadly outback, through glorious but harsh desert country. A hunting party led by the local lawman Sergeant Fletcher is formed to track Sam down. But as the true details of the killing start to surface, the community begins to question whether justice is really being served.

If the movie's outlook is less than hopeful, it nevertheless suggests that there is still time to learn from our mistakes.

Sweet Country shows that the Western is a genre of ideas that's as suitable to modernization in the northern Australian outback as in the ever-changing North American frontier.

Australia now has its High Noon.

Spare, deliberately paced, and almost Biblical in its search for moral justice in a harsh and lawless landscape.

The movie is a sincere work, with some remarkable performances, that centrally features Australia's parched, barren desert landscape.

From a beautiful, lyrical opening scene simply involving a dark bubbling pot and evocative audio to its devastating denouement, Warwick Thornton's Aussie western is a triumph of taut storytelling and visual flair.

The fourth feature by Australian filmmaker Thornton is not just the surprise of the week. It can even be the year, even though it has been released in our country with more than a year of delay. [Full review in Spanish]

Sweet Country is a powerful drama boasting strong performances, an engrossing story, and a viewing experience not easily shaken off.

Not only is Sweet Country a superb genre film, its focus on Aboriginal lives... makes it more than a little revolutionary. Most US Westerns fail at their indigenous representation, and this Aussie film is here to show them how it's done.

Jack Blackwell
One Room With A View

A piece of cinema that will both enrage and inspire you, Sweet Country is a true triumph of cinema.

Sometimes the expression "it's a beautifully shot film" is the kiss of death to me, akin to hearing in high school that a blind date had a great personality. Here that observation is not only not the case but indeed it is the least of it's many attributes, for here is a nuanced piece about, for instance, hatred, that doesn't use a megaphone to make its point. Instead, languid observation serves to reveal (as it should in a visual medium) some of the results of unthinking action. A potent work resonant with both scenic and personal and historic beauty.

I went in to Sweet Country completely blind, had no idea what it was about, knew literally nothing beyond Sam Neill being in it, and the fact that it was called "Sweet Country" (good thing too, 'cause the trailer I watched for it a week later spoils literally the most important and final plot point). Sweet Country is a slow-burn venture in the right way, that makes some odd stylistic choices which perhaps would have better served a different sort of movie. A distinctive film for a year that has had a lot of same-same movies.

This is one of a long line of Australian films about that country's Indigenous history that are documentary, not only a fictionalised story. Indigenous people made this film and the Indigenous actors here, while their film acting is superbly fluid and transparent, are not just acting. The history of their people is alive in them, as if the voices of the past are speaking now. That is a testament to the Indigenous survival. The influence of Indigenous people on today's Australian culture is such that the white actors' performances ring true with thorough understanding, and the cinema was full of non-Indigenous Australians. The film has the mark of inevitability - everyone is expecting to see these atrocities that happened in the everyday, during the taking of the Australian land mass. For Indigenous people, survival meant living through slavery, crime and betrayal. The predictability of this story underlines artistically what lies in the DNA of the country. Today, many Indigenous people live in third world conditions; nearly all child prisoners in jails are Indigenous. So the film is not surprising, and the audience did not go to see it for that. There is a desire to hear the Indigenous story told by the people themselves. Plus, the Indigenous style of telling is possessed of a great quick wit, a sure dart of communication, that gets you before you know it's coming. This story is told simply, with strong production values. The landscape and the dwellings are unremittingly harsh, with one exception - the stock horses looked like show specimens. Why not get the horses instead from among the thousands in the dogger sales, and give them a future? Otherwise, the film's value lies in its reality and lack of sensationalism: it's not about thrills, but the grind. In the age of gratuitous cinema violence, in contrast there is nothing extraneous here, though there is violence aplenty. Thinking of an outback tour? Make this film a part of your homework.