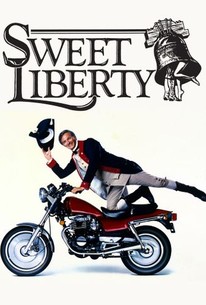 Alan Alda wrote, directed, and starred in this satirical film about the corruption of the film industry's approach to history. Alda plays Michael Burgess, a college professor who has written a historical novel about the American Revolution. The book has been turned into a script, and a Hollywood film crew descends on his North Carolina hometown to make the movie. Predictably, the director and actors make a mess of his concept, and Burgess becomes frustrated as the town is turned upside down. Desperately, he tries to salvage his concept with some last-minute script changes. To make things more complicated, Burgess falls in love with the glamorous female lead in the film, Faith Healy (Michelle Pfeiffer). Meanwhile, his long-time girlfriend, Gretchen (Lise Hilboldt) is pressuring him to get married. The film's male star, Elliott James (Michael Caine), finally shows up in town and becomes Burgess's rival for Faith's affections. Silent film star Lillian Gish appears as Burgess's smother.

Robert Zarem
as Publicist
View All

Mature audiences looking for decent mainstream entertainment should have a good time watching the consequences of this classic Hollywood standoff.

The movie wants to juggle a lot of characters all at once, but it keeps dropping the most interesting ones.

While the film suffers from a shoehorned relationship plot that tries to mirror the historical "romance" at the center of his book being filmed, the film excels when Michael confronts the film crew.

The film is relaxed, entertaining, and playful. [Full Review in Spanish]

OK light comedy, directed by and starring Alan Alda, about filming of movie in small town.

A sweet, funny comedy about the perils of being a writer and making a movie. An underrated charmer.

what a cute movie with a young Michelle Pfeiffer, Michael Caine, Alan Alda, and Lillian Gish. This movie was written, directed and starring Alan Alda whom did a good job. Alda is a writer who's book is being turned into a movie with Caine and Pfeiffer. This movie shows what a Hollywood crew can do to a little town while filming...it is too crazy.