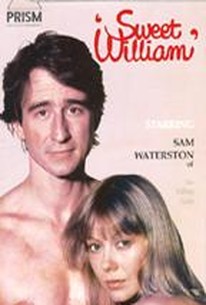 A British-American production, Sweet William is an R-rated movie about sexual relationships that focuses on the flings of an untamed Scotsman named William (Sam Waterston). William has had two marriages and many affairs, and he approaches more romantic adventures without feeling any guilt. His next target is a sensitive and naïve London woman, Ann (Jenny Agutter). Her boyfriend is away on business in the U.S., and the irresistible William woos her by acting lovably loony. Ann soon learns of William's reputation, even though he does his best to hide his past and his current fancies. She decides that some woman finally needs to take a stand against William's charms. Ann eventually makes him choose between continuing his philandering ways and settling down for true happiness. Despite its theme and rating, the film has no explicit sexual scenes. ~ Michael Betzold, Rovi

There are no critic reviews yet for Sweet William. Keep checking Rotten Tomatoes for updates!

There are no featured reviews for Sweet William at this time.