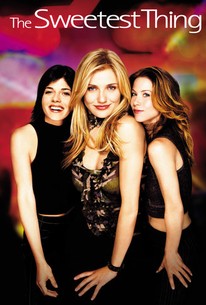 Critics Consensus: A collection of hit-or-miss gags tied together by a thin plot.

Critics Consensus: A collection of hit-or-miss gags tied together by a thin plot.

Critic Consensus: A collection of hit-or-miss gags tied together by a thin plot.

Former South Park writer and Win Ben Stein's Money sidekick Nancy Pimental makes her feature screenwriting debut with this relationship comedy. Cameron Diaz stars as Christina Walters, a jaded, club-hopping single woman in Boston who has given up trying to find the perfect mate to focus on "Mr. Right Now." Her equally cynical friend, Courtney (Christina Applegate), a divorce attorney, shares much the same attitude. Christina's life changes forever one evening at a nightclub where she meets Peter Donahue (Thomas Jane), a man she finds adorable and just about perfect. Unfortunately, Peter disappears and all she knows about him is that his brother, Roger (Jason Bateman), is getting married soon and having a bachelor party nearby. When crashing the party doesn't pan out, Courtney suggests they road trip to the wedding and Christina agrees, leading to encounters with a series of obstacles, including some funky leftovers and an insane bank security guard. The Sweetest Thing co-stars Parker Posey and Selma Blair.

Melanie H. Gassaway
as Spinner No. 1

Marc Goldsmith
as Paramedic No. 1

Shannon Murphy
as Spinner No. 3

Hellena Schmied
as Spinner No. 2

Linda Stein
as Wedding Guest No. 4

Erik Stolhanske
as Paramedic No. 2

Damon Williams
as Wedding Guest No. 2

Don Winston
as Eric the Bartender

Herbert Ankrom
as Wedding Guest No. 3

Cyia Batten
as Go-Go Dancer in Club
View All

News & Interviews for The Sweetest Thing

14 Rotten Rom-Coms We Love
TORONTO: Short Reviews Of "Stranger than Fiction," "Little Children," and "The Host"
Another Exclusive Clip from "Just Friends"

View All The Sweetest Thing News

Critic Reviews for The Sweetest Thing

Extremely lowbrow -- definitely not for kids.

The filmmakers have obviously studied There's Something About Mary, and learned nothing.

The overriding effect of watching these actresses debase themselves is the cinematic equivalent of a motorway car wreck.

Female characters should be allowed to engage in raunchy humor on the big screen; they already do on the small one with Sex and the City. But unlike that HBO series, The Sweetest Thing has no guts.

This picture is one of the flattest, stupidest, unfunniest sex comedies -- as well as one of the worst all-round pictures -- I've ever seen.

The entire film is one big excuse to play one lewd scene after another. About half of them are funny, a few are sexy and none are useful in telling the story, which is paper-thin and decidedly unoriginal.

The Sweetest Thing is worth a peek at a matinee price if only to see the talented cast who go for broke, have fun with themselves and their characters and who, at the very least, remind us all that girls, like guys, just wanna have fun...

It's not great or inspired by any means, but it's cute and amusing enough.

Call it a younger, West Coast cousin to Sex and the City, or There's Something About Mary from the woman's point of view.

If a date suggests the two of you should go and see this film dump them.

...Mixes smut and wacky girlfriend antics in equal parts, often scoring the guilty chuckle in spite of itself, with plenty of bra-and-panty shots to please the guys.

Audience Reviews for The Sweetest Thing

Please, somebody could say to Cameron Diaz to stop make any movies, they're just horrible and that the only good comedy which she made a big role is There's Something About Mary and The Mask, thank you. The Sweetest Thing is a mix of a gross out and romcom that is really silly, so silly that makes me want to puke. It's one of this movies that is look like an awful music that you doesn't like, but stay in your mind and tortures you. Dispite the scene being in your mind, it have the able to make you embarrassed, from the first until the ridiculous ending credits.

The idea forwarded here seems to be that cows can be just as stupid and lewd and backward as bulls (!!!). The result amazingly reaches the same conclusion: boring, and embarrassingly so. The cast, however brave, fails to lift the material. The groaning you will hear, that'd be you.

Hilarious! Some of the scenes were cringing but you couldn't help but laugh.

This movie is one big hot mess, but it's so disastrously, disgustingly fun I don't even care.