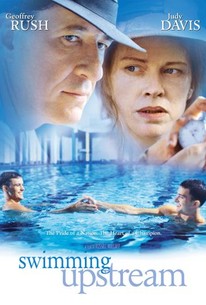 Based on the true story of a youth from Brisbane, Australia, who overcame family dysfunction to become a world-class athlete, director Russell Mulcahy's drama centers on young Tony Fingleton's (Jesse Spencer) relationship with his distant father, Harold (Geoffrey Rush), and the dedication it took to win his respect. Born into a large family and convinced by his father that he will never amount to the achievements of his brothers, Tony attempts to win his father's respect by becoming a champion swimmer. Despite his best efforts to please his father, Tony also begins to realize his own self-worth in the process.

Murray Rose
as Reporter
View All

Basically, this is a fairly run-of-the-mill story of family dysfunction with a sports twist.

The story isn't unusual or compelling enough to make a lasting impression.

Good as Rush and Davis are as combative working-class parents Harold and Dora, their story line overpowers the drippy dramatics of their teen athlete son. It unwittingly feels like two separate movies.

Makes you sit up and take notice, if only for the fine performances of the terrific Judy Davis as his abused mother and Geoffrey Rush as his bitter, angry dad.

The grim material isn't helped by the hackneyed direction of Russell Mulcahy, a music-video veteran.

The glimpses we get of this profoundly dysfunctional and violence ridden family are just that, as if viewed vaguely from a nosy neighbor's window.

A moving drama that's ultimately worth seeing for the performances of Geoffrey Rush and Judy Davis, even if you feel that you haven't quite heard the full story.

It'll not be remembered for the ages, but it succeeds in avoiding biopic pitfalls that have succumbed some of the best, and that's good enough to make it worth a look.

Geoffery Rush steals the show like he always does.

Leave it to Mulcahy to screw everything up with an overwrought, MTV-ready visual style that obscures any dramatic heft.

Swimming Upstream. Beautifully acted, but filmed with restraint. When I say filmed with restraint, I'm referring to Swimming Upstream's underselling of itself. At times this is its weakness, while other times it's a strength. In the extremely dramatic scenes involving the family's troubles, the emotion is very raw and honest without being flashy and soap-opera-ish. While it was fun to see Jesse Spencer out of his role on House (for real, great performance), the obvious shining light was Geoffrey Rush (who won an Oscar for Shine, see what I did there?). I'm surprised he wasn't nominated for this, because he steals the show in every single scene. Even when you're supposed to be thinking about Spencer's emotional battle, you're putting every ounce of effort into reading Rush's subtle blank stare. They even threw in a couple of random impressively artsy cinametographical (not a word) tricks, like filming the kitchen fight from underneath through a glass floor... looked awesome. The split screen swim meets worked well also, a bit strange at times, but a good fit. Why 80%? Because the juxtaposition of the swimming storyline with the family turmoil was great, as well as the performances. A well-crafted movie for an inspiring story. Extra: An ode to Geoffrey Rush... Your disgusting jaw compelling so, The way you ramble to and fro. The nasty wrinkles of your cheek, I only imagine how you reek. Unkempt hair, skin not so fair, Your gangly arms are hard to bare. Yet still I watch on the edge of my seat, Cuz your performances can't be beat.

he story of a young man's struggle to gain his fathers love and approval. As the most sensitive and brightest boy of a very large family, Tony tries to please his macho father who appears to be unimpressed by his academic prowess and only accepts sporting triumph as sucess. Based-on-a-real-life film with stunning pool filming and good looking actors. Swimmers will understand the pull that the pool has on Tony as he copes with his difficult life. An inspiration to get back into serious swimming.