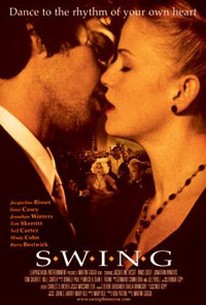 SWING is the dance- and music-filled story of Anthony Verdi (Innis Casey), a young man caught between his dream of being a full-time musician and the conventional life of his security-minded father (Tom Skerritt) and long-time fiancé (Dahlia Waingort). But Anthony has the encouragement of several important people around him. There is Bill Verdi, his loving great-uncle (Jonathan Winters), who is determined that Anthony will not meet with the same fate as his musician brother, Anthony's grandfather whom he never knew. Anthony's outrageous bass-playing roommate (Mindy Cohn) knows first-hand the joys and satisfactions of a musician's life. The head of his great-uncle's nursing home (Nell Carter, in her final performance) recognizes Anthony's talent and leads him to an important break. First and foremost there is Christine, the beautiful older woman (Jacqueline Bisset) he meets in an out-of-this-world forties night club he chances upon, who teaches him to swing dance. From her he also learns that swing is a metaphor for life and that, only if he follows his heart and starts being who he truly is, can real happiness be his. Along this journey of self-discovery, which includes confronting his father's expectations and coming to the realization that he and his fiancé no longer share a common future, a young woman named Tina (introducing Constance Brenneman) keeps reappearing, a sure sign that Anthony is heading in the right direction. Barry Bostwick, Christine's late husband and angelic mentor; Jim Hanks, the all-knowing maitre'd of the night club; and Adam Tomei, the eccentric drummer of Anthony's trio, round out the cast. Shot in San Francisco and Oakland, SWING, with its positive message about the true source of happiness, exciting swing dance sequences, and an eclectic mix of musical styles, resonates with both the young and the young-at-heart. -- © Official Site

Amy Hutto
as Martha's Flavor of the Week

Hapi Murphy
as Master of Ceremonies

Calum Grant
as Bartender No.2

Does have the advantage of boasting a fair amount of genuine onscreen talent.

Attempts unsuccessfully to liven up a tired scenario with a touch of Twilight Zone fantasy.

This sappy fable about music's power to stir the soul to life never finds its groove.

Writer Mary Keil and director Martin Guigui have little ability for striking a narrative tone and maintaining it, be it dramatic or comedic.

It takes a Twilight Zone-lite premise and spins it into the ground with addlebrained glee.

There are no featured reviews for Swing at this time.