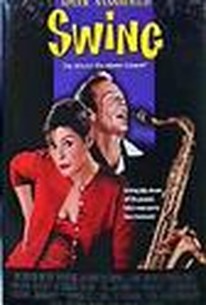 Swing is the story of working-class friends who escape their bleak Liverpool lives to launch a swing band. Martin (Hugo Speer) spends two years in jail for his brother. When he gets out, he is handed two years of unopened love letters and a piece of advice: get a job or end up back in jail. Nothing much has changed back home during his absence. His sax-playing cell-mate Jack is the only sage person to guide him. Martin decides to start his own band. He recruits bassist Buddy, a skirt-chasing football star and drummer, and Oi, an ex-skinhead. The brass section is made up of barflies who owe his dad a favor. But one person who can lead the band to success is the beautiful singer Joan (Lisa Stansfield), the love of Martin's life who is now married to Martin's arresting officer and is not sure if the band is another one of Martin's hopeless dreams. Martin convinces everyone that the dream is worth fighting for. Despite a raid by Joan's jealous husband, the band's gig is a success and a recording contract is on its way. Then the police find out that Martin's brother backed the band with stolen money. Martin is back in jail, but this time when he comes out, he has Jack with him and Joan is waiting with the whole band to start again. ~ Gönül Dönmez-Colin, Rovi

Stansfield, in a relaxed acting debut, delivers a performance as robust as her soulful vocals.

Incompetent, overlong, pointless, and the only film I've seen that thinks a keyboard is a brass instrument

There are no featured reviews for Swing at this time.