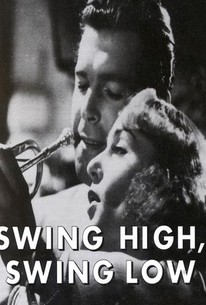 Swing High Swing Low is a new coat of paint on the old stage play Burlesque, first filmed in 1929 as The Dance of Life. Ex-serviceman Skid Johnson (Fred MacMurray) rises to the uppermost rungs of show business as a bandleader. As his fame swells, so does his head, and he becomes impossibly arrogant, forgetting the friends who helped him get to the top -- not to mention his ever-faithful sweetheart, band vocalist Maggie King (Carole Lombard). Consuming great quantities of booze, Skid hits the skids, ending up a skid-row derelict (there seems to be a pattern here). The ultimate humiliation comes when he isn't even allowed to return to the Army because his insides are shot. In the film's calculatedly teary finale, Skid is rescued emotionally and professionally by Maggie, now a big star in her own right. As indicated by the synopsis, the film is banal and old-hat, but the stars are terrific, especially Carole Lombard, who sings in several scenes (and not all that badly!) Swing High, Swing Low was remade in 1948 as When My Baby Smiles at Me.

Anthony Quinn
as The Don

Harry Semels
as Chief of Police

Lee Bowman
as Man in Nightclub

Nick Lukats
as Man in Nightclub

Dennis O'Keefe
as Purser
View All

Any film that has Franklin Pangborn, no matter how little screen time, should have been able to swing more high than low.

Boy meets girl, boy loses girl, boy gets girl again, roll credits. The charisma of the stars carry the well known story then, and they don't do too badly at all. Look for Anthony Quinn and Dorothy Lamour in smaller parts before they were big time box office draws. MacMurray has to Act like he's playing a trumpet the whole film and I don't think he could play a lick, so that's something.

The story has cobwebs on it but Carole and Fred make it far better than it should be. Jean Dixon adds a nice bit of snap in support as well.