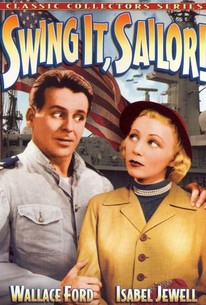 Men may come and men may go, but silly service comedies like Swing It Sailor go on forever. James Dunn and Ray Mayer star as Pete Kelly and Husky Stone a pair of over-age but under-mature gobs. Pete and Husky's main purpose in life seems to be duking it out over the affections of peroxide blonde Myrtle Montrose (Isabel Jewell) Back on duty, our heroes conspire to drive the rest of the Navy nuts with their goofy antics. Ultimately, Husky finds himself abandoned on a derelict ship slated for target practice, forcing the suddenly sobered Pete to race to his rescue. Most of the naval maneuvers seen in the final reels of Swing It Sailor were harvested from newsreel footage, some of it seemingly older than the three leading players.

Critic Reviews for Swing It, Sailor!

There are no critic reviews yet for Swing It, Sailor!. Keep checking Rotten Tomatoes for updates!

There are no featured reviews for Swing It, Sailor! at this time.