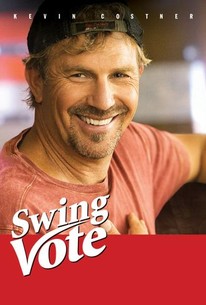 Critics Consensus: Despite Kevin Costner providing his most charismatic performance in years, Swing Vote fails to find the right mix of political satire and heartfelt drama.

Critics Consensus: Despite Kevin Costner providing his most charismatic performance in years, Swing Vote fails to find the right mix of political satire and heartfelt drama.

Critic Consensus: Despite Kevin Costner providing his most charismatic performance in years, Swing Vote fails to find the right mix of political satire and heartfelt drama.

When the mischievous antics of a precocious 12-year-old girl result in the outcome of the United States presidential election hinging on the vote of her apathetic, likable loser of a father, the man who thought that life had long since passed him by is reluctantly thrust into the national spotlight in this political-themed comedy starring Kevin Costner. Bud Johnson (Costner) is your typical American -- a simple man and loving father who never would have thought he had the power to change the world. Though when election day finally arrives and Bud prepares to cast his ballot, his overachieving daughter Molly proves to be the catalyst for a stunning series of events that place the fate of the free world in the hands of a man more comfortable slinging cases of beer -- her father. The two candidates are portrayed by Dennis Hopper and Kelsey Grammer, with Nathan Lane and Stanley Tucci as their campaign managers. George Lopez also stars as a local TV-station manager who has to deal with the political factions as they set up camp in the small town.

Richard Petty
as Himself

Bruce McIntosh
as Father in Classroom

Tony Blankley
as Himself

Aaron Brown
as Himself

Campbell Brown
as Herself

Tucker Carlson
as Himself

James Carville
as Himself

Matt Frei
as Himself

Mary Hart
as Herself

Arianna Huffington
as Herself

Anne Kornblut
as Herself

Lawrence O'Donnell Jr.
as Himself

It's a sentiment Capra might well have echoed, though he would surely have punched up the gags while he was at it.

The film varies between ironic cynicism about the political process and overt whimsy and sentimentality.

The blend between surreal satire and sentiment isn't always comfortable but the set-up is intriguing and Costner nails the part.

What starts out as a hokey satire on electioneering and spin becomes a hokey lesson on civic responsibility, with a catch in the throat and a tear in the eye. Try to suppress the curl in your lip.

Hayseed nonsense, folksily scripted. Whenever it becomes too much - or too little - close your eyes and think of Frank Capra.

Swing Vote is a benign but telling satire.

Swing Vote, like Costner's protagonist, is too benign to go for the jugular and settles instead for tickling us gently in the ribs.

Madeline Carroll offers one of 2008's best performances by a young actress in a film not featuring Abigail Breslin.

Costner himself believes that Swing Vote echoes the emotion and sentiments of Bull Durham and Field of Dreams. I have to agree. So, come August 1, cast your vote for Swing Vote. It's a winner!

What keeps Swing Vote from being good isn't politics, it's lazy plot devices.

It's impossible to resist such a massive onslaught of resources, music, and transparent narrative shortcuts meant to persuade you to exercise your right to vote.

Swing Vote has its moments, especially when Grammer or Hopper are around, but it's trying to do too much ... there's so many ideas floating around in there, it all ends up being very shallow.

The only redeeming quality of this sad, sad excuse for film is the potential of the young Carroll, however poorly the laughably puerile script may have utilized her ability.

Not as bad as most people make it out to be. Yeah, not the best movie around, but it did have its' funny and sweet moments.

A funny farce that is also quite touching and very Capraesque. The central gimmick is not really possible (more than likely), but the film explains it in a way that almost makes it believable. The ending is not important. The journey matters more than the destination. The large and notable cast (including numerous cameos) are terrific. Costener is great, but Madeiline Carroll gives the stand out performance. Do yourself a favor and see this funny and inspiring tale about personal responsibility, and why it matters to not be apathetic.

In spite of a pretty darned good performance by Costner, the film is pretentious, overblown, unbelievable and just plain obvious. Problems: Costner's charactor the "average Joe" (not the plummer) - an alchololic slacker has a daughter that is consciencious, overly brite and more mature than he is. Hmm, must be mom's genes? Nope, she leaves the family to persue a career as a country singer (so not a rocket scientist either). I simply did not feel it was possible for the daughter to be who she was with the kind of parenting she had. There are a few witty scenes lampooning the political process and how far we've all fallen in the media age (reminded me vaguely of "wag the dog"); where it becomes not about the issues but about who comes off better on tv. Kelsey Grammer does a good job as the reigning president, a baffoon on the surface, but revealing a deeper, weary of the games, side that is poignant. Dennis Hopper is wasted as the "opposition", and Stanley Tucci and Nathan Lane have not much room to operate as the opposing campaign managers. That a couple of 12 year old kids can go driving around, even in a small town, is absurd - as is the entire premiss of the film. When the film does finally take a detour into the darkness of humanity; having the daughter arrive on Mom's doorstep, only to find out that she is a drug addict and doesn't want her around - it takes one riviting scene and then backs out of the situation completly once Costner shows up. Sad - but even with a few more well thought out scenes like that one, the film is still a mess - trying to thrust the local hispanic reporter into the mix as a potential buddy/love interest, like so much of the film, is simply misguided.