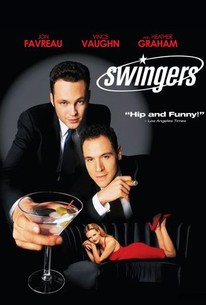 Critics Consensus: Funny, heartfelt, and effortlessly cool, Swingers made stars out of Vince Vaughn and Jon Favreau, established Doug Liman as a director to watch.

Critics Consensus: Funny, heartfelt, and effortlessly cool, Swingers made stars out of Vince Vaughn and Jon Favreau, established Doug Liman as a director to watch.

Critic Consensus: Funny, heartfelt, and effortlessly cool, Swingers made stars out of Vince Vaughn and Jon Favreau, established Doug Liman as a director to watch.

An ensemble comedy about five guys, all in their 20s, all coping with the mysteries of life and women, set in the back streets and sometimes hidden clubs of Hollywood. It's a story told in the language of the "cocktail nation," a growing 20-something, retro-Swing dance movement that's taken Hollywood by storm and is beginning to sweep the nation. Mike is down in the dumps because he left his girlfriend behind in New York when he came to Hollywood to seek his acting fortune. Instead, he's found loneliness and the blues. Now, after six months of dealing with Mike, his buddy Trent and the other swingers have had enough. It's time to bring Mike back to life.

Blake Lindsley
as Girl with Cigar

Jan Dykstra
as Girl at Party

Christopher A. Joyce
as Diner Patron

"Swingers" doesn't really add up to much -- except a good time. But it's smart, funny and cute. With all that going for you, who needs to be money?

Four guys hang out, kid one another, get into scuffles and flash their gonadal searchlight for available women. Yikes, haven't there been enough variations on the multiple-buddy movie? Actually, no.

A winningly confident snapshot of the nightlives of a bunch of young showbiz wannabes in a very upto-the-minute Hollywood.

Ninety minutes spent learning how not to pick up girls. This is what the movies were made for, isn't it?

Mr. Favreau wrote this screenplay with his real friends in mind. And the cast's camaraderie is appealingly clear.

A guy film that gives you something to latch onto, that makes male bonding both believable and appealing.

Wholly admiring bygone eras, this little indie darling bucked the mainstream and dazzled those looking for something dreamy, yet still honest, for its coarse present day.

It's not the most creative of plots, but it captures a generation and the down-on-your-luck-in-so-many-ways motif effectively: it's like comfort food, with more heart than Liman usually provides.

Director-cinematographer Doug Liman gets points for breathing a bit of life into an already tired indie sub genre.

One of the sharpest male-oriented comedies of the 1990s.

The arc is nothing new, but the writing and pacing make it fresh and energetic, at least enough for it to have became a cult classic.

With some great performances and a plot that is probably relatable to many people, "Swingers" is the type of film that may not break records or become a classic, but it is definitely a great film that many can enjoy endlessly. I found myself engaged in what each character was doing and the friendships felt hilariously realistic. Vince Vaughn's character is really the only one that get's to be a tad annoying after a while, but once you are used to him, you become more forgiving. From losers to players in a matter of one night, these guys make you wish you had the balls to do some of the things that they can do. In the end, I would surely recommend this to annoying who either wants to enjoy a great drama or a fun comedy, because it equally delivers both. There are a few slow moments where the film feels like it is about to drag, but it is quickly picked back up again. "Swingers" is a lot of fun!

'Swingers'. One of the most authentic movies about guys and their nature I've ever seen. Even though it's in a time and place that I never experienced, the dialogue by Favreau feels so real, and their little world at the time, captured perfectly. If it isn't enough that he wrote a darn good screenplay, Favreau plays the lead character, Mike, admirably. He's a lovable dude, even when you can't believe some of the idiocy on display when he's in his relationship funk. And that voicemail scene?! Ouch. I almost wanted to block out the screen, while laughing out loud at the same time. Surely the most memorable Favreau scene in his filmography. The movie transitions very nicely from this buddy ensemble to a sweet romance in one scene at the bar, and you can't help but cheer when he hangs up on his ex, knowing that he's ready to move on. Money, baby, money!

"You're money and you don't even know it!" Wannabe actors become regulars in the stylish neo-lounge scene; Trent teaches his friend Mike the unwritten rules of the scene.

REVIEW
When released in 1996, "Swingers" became an indie film sensation on par with "Sex, Lies, and Videotape" and "Reservoir Dogs" earlier. To be honest, it didn't really deserve that status, because it doesn't have the power either of those flicks held. Still, its quite enjoyable and easy to see why it became a favorite among dissatisfied twenty something males, with whom the flick touched a nerve. The characters spend their time cruising the hip nightspots of Hollywood trying to pick up chicks, and often failing either due to their bloated egoism or social awkwardness. Some critics of the film thought it was a bit misogynistic, and maybe it was, but it was also a rather accurate depiction of how many males in similar circumstances feel. The technical credits all around are quite good for a low-budget picture. The direction by Doug Liman isn't anything extraordinary, but it keeps the film moving at a quick pace. Its a shame that after this and the equally enjoyable "Go", he graduated to lousy mainstream products. The script by Jon Favreau is full of memorable dialog, classic scenes, and surprisingly a sympathetic protagonist. As the main character, Favreau creates a likable individual and Vaughn is charismatic here, but hasn't really done anything worthwhile since. All in all, this isn't an extremely powerful motion picture or anything like that, but its a breezy and amusing way to kill an hour and a half.

Finally got around to seeing this and I must say I'm glad that I did. It is an interesting look at the desperation of young single wannabe superstars in the 90's. While that certainly is a recipe for a good comedy, I was surprised at how much heart was injected into this storyline. These guys aren't idiots. Sure they believe that they are destined for stardom and that they are so "money" that women cannot deny them, but rather than walk blindly into every embarrassing situation, deep down they recognize that they are failures. So even though you cannot help but laugh at them, Liman makes us sympathize with the characters as well. Like many of us, they have grown up on a steady diet of Scorsese films and they truly believe that real life is just like the movies. In a way, I almost admire their myopia. And I certainly admire Liman's ability to make this story more than a paint by numbers buddy comedy. Favreau is great and it makes me miss the days when we got to see him during the picture rather than just the end credits. Also, it was good to see Vince Vaughn playing someone else rather than Vaughn playing Vaughn. It isn't revolutionary cinema, but it is a great watch and much smarter than I think it's fan-base gives it credit for.