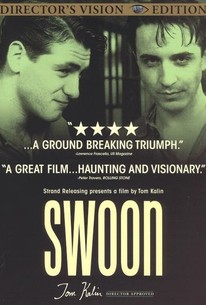 Tom Kalin directed this cool and aloof black-and-white study of the infamous Leopold and Loeb case, a case told before in two previous films -- Rope and Compulsion. In 1924, in Chicago, Nathan Leopold Jr. and Richard Loeb, two 18-year-olds, kidnapped and murdered the 13-year-old Bobby Franks, immediately killing him and then stuffing his naked body up a culvert. The motive for the crime was simply that they wanted to prove to themselves that they were smart enough to get away with it. The previous film versions downplayed Leopold and Loeb's homosexuality, but Kalin's version plays it up into a psychosexual motif. Loeb (Daniel Schlachet) is the calculating intellectual, while Leopold (Craig Chester), the amateur ornithologist, is the emotional and weak one. In love with Loeb, Leopold is willing to do anything for him, and when Leob uses the withholding of sex as a prompt, Leopold is even willing to commit murder to have his sexual desires satisfied by Loeb.

Trash
as Venus in Furs Diva

Trasharama
as Venus in Furs Diva

Julian Marynczak
as Workman in Marsh

John Rowan
as Man with Newspaper

John A. Mudd
as Detective Sbarbaro

Kalin... infuses the story with high visual style; his spare graphic framings and joltingly oblique angles both embody the past in heightened detail and conjure the killers' recklessly aestheticizing mind-set.

Swoon is too pleased with its own amoral pose; but Kalin has the same alarming assurance as his heroes, whose story has, if anything, grown in its power to shock.

Swoon goes much deeper than the other studies of the Frank case, because it tries to show exactly how the psychosexual balance between the two killers made a murder possible, when neither Leopold nor Loeb could possibly have killed by himself.

An exotic mood piece, based on the infamous Leopold-Loeb case, that probably didn't win director Tom Kalin many friends in the gay community.

As a dark, moody and stylized (the film is shot in b/w) poem of love and madness Swoon is effective, but as social polemic on contemporary gay issues, it's strained; even so, it's a striking feature debut.

Moody, dispassionate take on the savagery of crime that neither illuminates nor captivates.