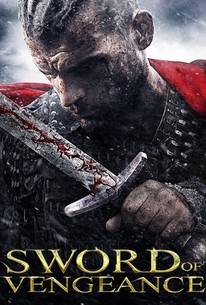 From the creator of HAMMER OF THE GODS, starring Stanley Weber ("Borgia") and Annabelle Wallis (ANNABELLE) comes the story of a Norman prince, freed from slavery, who seeks revenge on his father's murderer -his ruthless uncle, Earl Durant (Karel Roden). Gaining the trust of a band of exiled farmers, he leads them into battle against Durant, exploiting them in his quest to satisfy his code of honor. Will the prince sacrifice everything and everyone to quench his thirst for bloody retribution? (C) Well Go USA

Critic Reviews for Sword Of Vengeance

The ritualised action sequences work well enough. It's just a pity the film-makers did not pay as much attention to the plotting as to the design of the movie.

It's the kind of film that confuses slow-motion with significance: a shot of some rain dripping from the end of someone's nose takes minutes but tells us nothing except that the umbrella has not yet been invented.

As opportunistic Game of Thrones cash-ins go, this perversely watchable low-budget quickie at least improves upon its producers' risible Hammer of the Gods.

Without its gratuitous slo-mo, this gleefully daft medieval hack 'n' slasher would last somewhere in the region of 15 minutes.

Glum, dumb and (even at 87 minutes) bum-numbing.

There is a brutal simplicity to the action that will appeal to some, but in terms of non-violent content Sword of Vengeance seems stretched even for a relatively short film.

Despite all the action and the relatively short running time, we seem to spend large portions of the film waiting for something to happen.

Fans of samurai movies, historically inaccurate hairdos and a video camera's slow-mo button should lap up this daft swords and sandals slasher.

Audience Reviews for Sword Of Vengeance

There are no featured audience reviews yet. Click the link below to see what others say about Sword Of Vengeance!