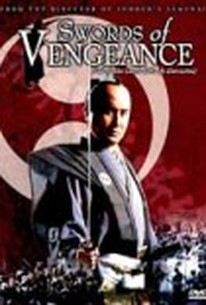 Japan's greatest actor, Toshiro Mifune, and their most powerful action star, Sonny Chiba, team up in this historical action drama. Oishi is an honorable warrior who serves obediently under Lord Asano. After an angry exchange with the villainous Lord Kira, Asano impulsively draws his sword, an act that draws the wrath of the emperor. The emperor gives Asano strict instructions to commit suicide as punishment for his actions; Oishi is devastated by Asano's passing, and he organizes a band of fellow swordsmen to seek revenge against Kira and restore Asano's good name. Swords of Vengeance (aka The Fall of Ako Castle) was directed by Kinji Fukasaku, whose credits include the Yakuza Papers series and the controversial Battle Royale. ~ Mark Deming, Rovi

Critic Reviews for Swords of Vengeance

For all its problems, Vengeance is a stunning work.

There are no featured reviews for Swords of Vengeance at this time.