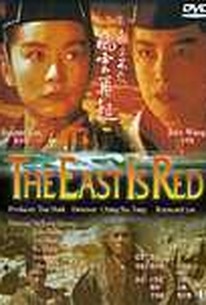 The third installment in the Hong Kong Swordsman trilogy is intended to recapture the success of the second film, including its gender-bending performance by Brigitte Lin. Lin reprises her role as Asia the Invincible, a swordsman whose use of a supernatural scroll caused him to turn into a woman. The scroll is once again the object of contention. Resurrected from the dead, she finds that everyone from Japanese ninjas to the Spanish navy are after the scroll. She is confronted by further gender complications when a woman named Snow Joey Wong, a former lover of Asia, assumes Asia's male identity. ~ Jonathan E. Laxamana, Rovi

This film has a number of names, East is Red, Swordsman III, Invincible Asia 2: Turbulence Again Rises , and Dong Fang Bu Bai: Feng yun zai qi .This is the third in a series of Swordsman Films. This is a surprising plot, its early 18th century and the Spanish the Japanese invaders and the Spanish colonialists have shown up ion the Asia shore, they combine forces with a band of local Asians who are after the Special scrolls. This film is full of flying swordsman fantasy. Also have neat things like throwing needles that go through Cannons, A ship that turns into a submarine. Its an OK film, doesn't make me want to rent first two in series. But I can't part with more then 2 1/2 stars.

No where near as good as Swordsman II, but still has its moments.

Not a bad swordplay film and different casts are quite okay except actress Brigitte Lin from Swordsman II is superb as androgynous villain.