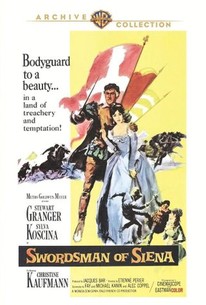 Stewart Granger keeps his sword in hand and tongue in cheek in this swashbuckling romp costarring Sylva Koscina (Hercules) and co-written by Academy Award (R) nominees Fay and Michael Kanin (Teacher's Pet, 1958). With a smile on his lips and a twinkle in his eye, dashing English soldier of fortune Thomas Stanwood (Granger) sells his sword to the highest bidder. So when Siena's cruel Spanish overlord Don Carlos (Riccardo Garrone) hires him to protect his fiancée, the beautiful Tuscan noblewoman Lady Orietta (Koscina), Stanwood happily complies. His allegiance soon changes, however, when Orietta's innocent young sister (Christine Kaufmann) is ordered to marry Captain Hugo (Fausto Tozzi), Don Carlos' sadistic cousin. Joining the rebel group known as The Ten, Stanwood enters the deadly horse race of Siena in a daring attempt to rouse the people, depose Don Carlos and claim Orietta as his own.

There are no critic reviews yet for Swordsman Of Siena (La congiura dei dieci). Keep checking Rotten Tomatoes for updates!

There are no featured reviews for Swordsman Of Siena (La congiura dei dieci) at this time.