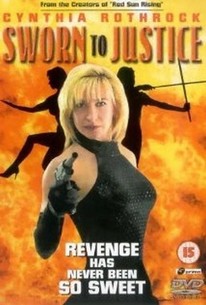 Jana Dane (Cynthia Rothrock) is a psychologist and forensic prosecution witness whose testimonies have earned her the respect of her colleagues while putting some of the most dangerous criminals on the street behind bars. When Jane is beaten to within an inch of her life by masked burglars who subsequently murder her sister and nephew, the injuries she sustained leave her with remarkable psychic powers. As Jane's thirst for revenge grows, she learns to hone her newfound telekinetic abilities and use them to serve justice by night while enforcing the law by day.

Sid Sham
as Dan the Man

Gwendolyn Mitchell
as Judge
View All

Critic Reviews for Sworn to Justice

There are no critic reviews yet for Sworn to Justice. Keep checking Rotten Tomatoes for updates!

Audience Reviews for Sworn to Justice

There are no featured audience reviews yet. Click the link below to see what others say about Sworn to Justice!