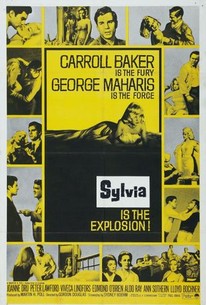 Carroll Baker, the Sharon Stone of the sixties, plays another classy-looking blonde with a sordid background in Sylvia. Millionaire Peter Lawford is about to marry the glamorous but secretive Sylvia (Baker). Before taking the plunge, he hires private eye George Maharis to do a background check on the girl. Whew, what he finds out! Apparently the only sin Sylvia doesn't commit is robbing parking meters, but we have no idea what might happen after the final fadeout. Shortly before it opened, Sylvia was the subject of several magazine articles, trumpeting the fact that Carroll Baker had conducted extensive interviews with real-life prostitutes in order to prepare herself for her role. This apparently left her no time to consult an acting coach. ~ Hal Erickson, Rovi

Bob Random
as (uncredited)
View All

There are no critic reviews yet for Sylvia. Keep checking Rotten Tomatoes for updates!

There are no featured reviews for Sylvia at this time.