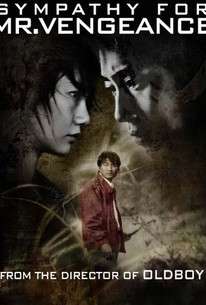 A deaf-mute man, Ryu, works in a smelting factory and inhabits his own silent world, oblivious to the din both at work and in his downscale apartment building. He idolizes his sister, who urgently needs a kidney transplant, and when he's laid off and then tricked out of his savings by organ traffickers, his wacko girlfriend, Yeong-mi, suggests kidnapping his former boss's daughter to pay for his sister's operation. Yeong-mi sees it as social revenge. Ryu, initially scared of the consequences, finally agrees after seeing another laid-off worker attempt hara-kiri outside the boss's home. After kidnapping the boss's daughter, their whole plan starts to quickly unravel with horrible consequences.

Se-dong Kim
as Chief of Staff

Kwang-rok Oh
as Anarchist
View All

There's a genuine sophistication, both technically and thematically, to what Park is doing in Sympathy For Mr. Vengeance.

Park prizes craftsmanship over bargain-bin schlock. It's an odd testament to his spiritedness that, despite the coldblooded killing and trail of the dead, Mr. Vengeance feels warmly suffused with life.

Fun, up to a point, but once it crosses its own internal Rubicon it becomes downright horrific, with blood and torture and the vertiginous sense of being unable to wake from a particularly arresting nightmare.

It is a worthy start to a trilogy and to a director who is fast establishing himself as a new light in Asian cinema.

Promises to be a stylish, resonant plunge into the dark waters of despair and revenge but ends up amusing itself with ostentatious shocks.

It's all a little ultra-cool for me. Shakespeare was right. Revenge is a dish best served ice-cold, not cool.

The physicality of the violence in 'Sympathy for Mr. Vengeance' spirals beyond control.

Park forces us to consider a world where good intentions go awry, decent people do bad things, and fate deals cruel cards. But even at its darkest moments, Sympathy finds surprising and heartbreaking shreds of humanity.

Confirms Park's mastery of a niche style of cinema that is glossy, morbid and childishly provocative.

Slightly more enjoyable than getting a kidney transplant.

The first film of Park Chan-Wook's Vengeance Trilogy is this intense, tragic and highly stylish thriller/bloodbath that plunges its miserable characters into a bleak and inescapable circle of misfortunes and revenge.

A deaf-mute tries to sell a kidney on the black market to pay for a life saving operation for his sister, but when he wakes up left for dead minus both the money and his kidney he hatches a scheme to kidnap his ex-boss' daughter for the ransom. When she is accidentally killed it sets in motion a sequence of events that result in bloody vengeance for both men. The first chapter in Chan-wook Park's vengeance trilogy reminded me very much of a Tikeshi Kitano film; beautifully shot but very understated with moments of surreal humour, brief outbursts of grim violence and a typically nihilistic ending. He attempts to show the motivations and context of the actions of all involved and so the brutal acts of vengeance perpetrated by the characters who have become increasingly black-hearted through grief and loss garner little sympathy from the viewer. I also found the plot a little too far-fetched to swallow and so I felt it was easily the weakest of the three, but that is hardly the most damning of criticisms as the others are amongst the best films I've ever seen. A technically excellent film that won't be for those with a weak stomach, but a memorably visceral experience for those able to stay the course.

This is the first entry in director Park Chan-wook's so-called "Vengeance Trilogy", and man, it's a sleazy little affair. A deaf-mute resorts to drastic measures to help his ill sister get a kidney transplant, and things spin terribly out of control when the initial plans don't go as intended. I liked the idea behind this, and the concept is good, but I think the execution is far better than the meat of things. Yes, there are characters, and we get a bit of back story and motivation, but it's really bare bones and could be far better. But like I said, the execution is what saves this. The cinematography and camera moves are top notch, the sound design and technical gimmicks are great, and I appreciated the dark sense of humor that goes along with the brutal (and well done) moments of violence. I really know nothing about the cast, but I enjoyed their performances as well. Some of them have some tough stuff to pull off, but they do an admirable job. Bottom line, this is good, but could have been a lot better, primarily in the development and story departments. It's a rough film, but it's got some food for thought, and is done in a stylish way, so give it a chance.